<![CDATA[ <p style="text-align: left;">SOUTH Down Sinn Féin MLA’s Caitríona Ruane and Chris Hazzard have called on the public to ensure they complete electoral registration forms to guarantee their right to vote in the coming EU and local council elections next May.The call comes following the commencement by the Electoral Office of a six county wide canvass to re-register everyone eligible to vote. 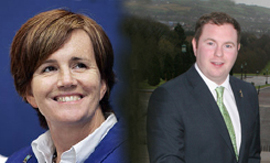 Sinn Féin South Down MLA’s Caitríona Ruane and Chris Hazzard are calling for everone to ensute their vote is registered for the elections in 2014.[/caption] Ms Ruane said: “I want to urge everyone in the South Down area to work with the electoral office in completing this job of work and safeguarding everyone’s right to vote at election time. 2014 will see two elections and it is extremely important that everyone eligible to vote take full advantage of that right. “Even those who have previously been on the electoral register will have to do so again or they will be unable to vote. If anyone is not contacted by the electoral office they should not hesitate to contact their local Sinn Féin office, where they can be given a registration form.” Mr Hazzard echoed his colleague’s sentiments, and said:  “it is important that young people get on the register. Given the ever changing face of politics in the North, it is imperative that young people make sure they get on the electoral register, and have their say through the ballot box come election time. “New voters should take full advantage of the registration drive currently underway by the electoral office. Exercising your democratic right is a luxury sometimes not afforded to people in other parts of the world and it is important that young people see how lucky they are to be able to influence the policies and decisions taken at the highest level of government,”  explained Mr Hazzard.]]>