Weather conditions were unsettled but given the forecast earlier in the week conditions were far better than expected. A supportive crowd gathered at the Quayside  to watch the two races get under way organised by starter Angela Gilmore of Killyleagh Yacht Club. 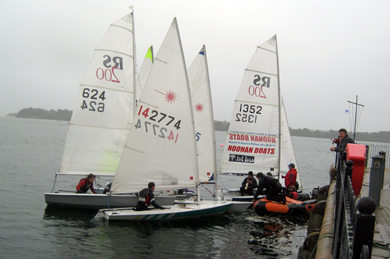 Some of the yachts that took part in the Dundrum Sailing Regatta at the weekend.[/caption]

The first race was for Lightning Sailing Boats won by Ian and David Groves from Dundrum in The Elk, and second was Roger Noblett and Mark Andrews from Dundrum in Stars and Stripes. The race was sponsored by Frenchies Coffee Shop, Clough.

Ian Groves, club chairman, said: “This was the second Regatta for newly formed Dundrum Sailing Club and one of the reasons for forming the Club apart from encouraging people from the local area to take up sailing is to preserve the Lightning class of sailing boat.

“This boat is of American design and was first raced in Strangford Lough by Killyleagh Yacht Club in the 1940’s, but recent years have seen a change of venue from Killyleagh to Dundrum as the place where Lightnings now sail. 2013 sees the 75th Anniversary of the birth of this famous sailing boat designed in 1938 by Sparkman and Stephens, well-known American Naval Architects.

“The Second race was a Handicap race for Sailing Dinghies won by Clive Coffey of Newcastle Yacht Club in Braalyriggit and  second was Frank Campbell of NYC in a Laser 12774.  In third spot was Lucy Grainger in Terpsicore in a Laser Radial. The race was sponsored by The Dundrum Inn.

“John Flynn and Ollie Forsythe deserve a prize for most memorable moment as their Dart 18 Catamaran dismasted at full speed in a broad reach!

“Dundrum Sailing Club would like to thank all our sponsors and everyone who helped in any way to make the Regatta possible, and a Special Thanks must go to Down District Council for use of their Car Park and for sponsorship and support for the club throughout the year.”