<![CDATA[ <p style="text-align: justify;">DOWN District Councillors are keen to ensure that they leave a lasting legacy to the district in tangible community assets such as leisure centres and playgrounds and other facilities. Over recent months this has become a dominant theme as the council heads for the home straight towards its unification with Newry and Mourne Council into a super council from next May following the Shadow Elections.

At the full Council meeting on Monday evening, the Council’s underspend of £267k was addressed along with money Down District Council is to contribute to the costs of the Statutory Transition Committee, a sum of £223k. 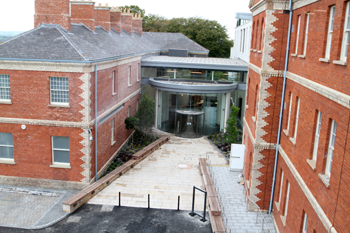 Down District Councillors want to leave a lasting legacy to the people of the area prior to the merger with Newry and Mourne Council.[/caption]

Officers suggested that Council should use the funds of the underspend to pay for the contribution to the Statutory Transition Committee. However, Councillors insisted that this underspend  must be ring-fenced to pay for projects across Down District and that the Statutory Transition Committee costs should be taken from Council Reserves. This is the recommended course of action suggested by the DCAL Minister.

Councillor Carmel O’Boyle, Chair of the Recreation and Community Services Committee,  has indicated that she has been working with the Director of Recreation since she took over the Chair in June to identify funds that can be used to start and complete projects across the district. When the underspend money came to light, she said it was the perfect opportunity to earmark it for these legacy projects.

Speaking after the meeting, Councillor O’Boyle said: “The Council’s underspend of £267k has now been put at the disposal of my Committee. This money will be ring-fenced and spent on sports and community groups across the district to begin and to complete projects. The money needed to meet the Council’s contribution to the Statutory Transition Committee of £223k will be drawn from the Council’s Reserves, as advised by the Minister.

“Since I became Chair of Recreation in June of this year, I was determined that we should identify funding that would help our Council to leave a legacy for the people of Down District. This challenge has now been met and the money will be there to provide for local communities, particularly those that have received little from us in the past.

“More work than ever is being undertaken by the Recreation Committee to ensure that projects are brought to fruition. Later today I will be meeting with another local sport’s group and with Council officers to discuss ways in which their community might avail of the windfall funds we have secured. How we intend to allocate this additional funding will be discussed by the Recreation Committee on Monday 16 September.”