<![CDATA[ <p style="text-align: justify;" align="center">DOWNPATRICK Sinn Féin Councillor Liam Johnston has hit out at those responsible for attacking a young woman in the Demense area of Downpatrick in the early hours of Thursday 10 October.

Councillor Johnston said: “The whole community in Downpatrick is stunned, shocked and angered by this brutal attack on a 27-year old woman with what appears to a firearm. The thought of these criminals carrying firearms and beating up defenseless women is really sickening.

“No matter what the reasons or excuses these people have, they still have no place in a modern society or indeed Downpatrick. The good, decent and honest people of this district don’t want or need these thugs running around our towns.

If anyone has any information whatsoever they should contact the PSNI or Crimestoppers immediately.

“These elements have no place on our streets and they and their firearms need to be removed from society.” 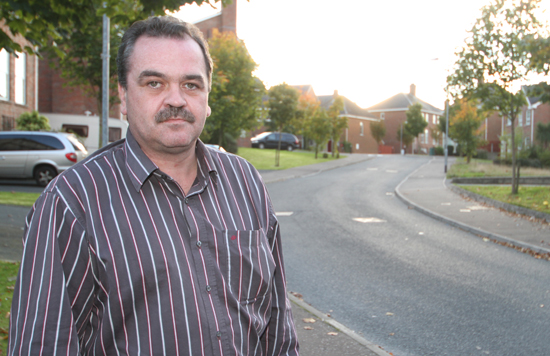 Councillor Liam Johnston has condemned the attack on a woman at the The Demesne in Downpatrick.[/caption]

Detectives in Downpatrick are appealing for information following the assault that occurred in the Demesne Crescent area at approximately 4am. A 27-year old woman was threatened and assaulted by two men outside her home. One of the men was armed with a suspected firearm and he threatened her. The other man assaulted her by hitting her twice on the head.

Anyone with any information about this incident is asked to contact CID in Downpatrick Police Station on 0845 600 8000.

Or if someone would prefer to provide information without giving their details, they can contact the independent charity Crimestoppers and speak to them anonymously on 0800 555 111.