<![CDATA[ <p style="text-align: justify;">DUNLEATH Park in Downpatrick is the centre of a stinking row… literally.

Sewage may be seeping through the leaking pipes that run under the Dunleath Park playing fields and Down District Council officials have closed the sports’ area temporarily until an NI Water engineer has provided a report. 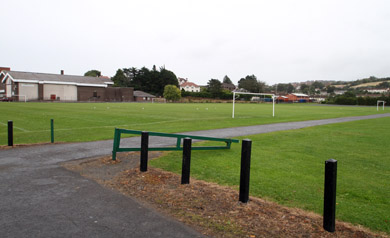 Dunleath Park in Downpatrick – a health scare has emerged after sludge from a sewage pipe has again leaked onto the playing fields. NI water is investigating.[/caption]

The public health concern was discussed at the Council Recreation Committee meeting on Monday evening (16 September) and councillors were deeply concerned that this issue had once again surfaced.

A Council official reported that sludge had been seeping from the pipes and that the park had been closed in the interest of safety. Over 1000 children alone use the pitches for the Downpatrick Youth Football League along on a Saturday and around 200 on a Sunday. He explained: “We immediately contacted NI Water and insisted that an engineer come down and look at this problem and  do an assessment of of it.

“The last time this happened it was at least ten times worse, but we do not know if it is a faulty pump, the weather conditions or what it is. We have logged this complaint with NI Water and have received our case number.  We need to determine that it is in fact sewage. We have therefore had to make the call that it is a potential health hazzard and for that reason the pitches are out of bounds at the moment. We really need a full assessment and a recovery plan for this.”

Councillor Liam Johnston said: “As far as I know this has happened three times in about four years. This is unacceptable. NI Water have a key role to play in this. Currently there are awful smells around Downpatrick from the Flying Horse, Stream Street and the Vianstown Road to Market Street. We need to send a letter to NI Water explaining that this is totally unsatisfactory and demand that it is remedied, as well as the situation at Dunleath Park.”

Councillor Willie Clarke said it was not just a matter of the loss of a sporting facility, but “there was a real and serious risk of the ground being contaminated. This is really a disgraceful situation.”

The Chairperson of the Recreation Committee, Councillor Carmel O’Boyle, noted that the issue would be on the full council agenda for next Monday evening.

Rowallene Councillor Terry Andrews added: “I am now concerned about the Downpatrick Leisure Centre development as a whole. This is our flagship leisure project and it sits on the lowest land in Downpatrick. We do need NI Water to step up to the mark and explain what is happening. This is a serious issue.”

In looking forward to the Youth League matches scheduled for this coming weekend, Councillor Gareth Sharvin asked: “Will the DYFL be on or off this weekend? When will we know what is happening. The many children will be looking for their game of soccer at the start of their season.”

However, there were no conclusive answers as the Council official explained that the matter was being monitored closely and he would be following up to ensure the best possible steps are taken to protect the users of Dunleath Park.

Significant works are planned for January 2014 to improve the sewage system, and unless remedial work soon can guarantee public safety, a difficult decision will have to be made by Down District Council as to whether Dunleath Park stays OPEN or CLOSED.

In a statement from NI Water, the indication is that there appears to be no short-term solution to the problem.

Down News contacted NI Water to seek an explanation and a spokesperson said: “NI Water received reports, on Monday, of out of sewer flooding at Dunleath Park. Contractors were sent to the site for an immediate response, however, as yet, the cause for the spillage is unknown.

“Approximately £2 million is being invested in Dunleath Park and construction is due to commence in January 2014.

“The work will include closing two CSO’s (Combined Sewer Overflow – during exceptional storm events, when the capacity of a sewer is overwhelmed. A CSO acts as an essential relief valve preventing overloading of the network which could otherwise lead to flooding of properties and Waste Water Treatment Works)

“To close the CSO’s, additional storm storage capacity (for the storm water which currently spills) within the local system is required ie  adjacent to the pumping station and CSO’s.

“We also need the continued support of the public to work with us to dispose of inappropriate items in the bin rather than down the sewer. Items such as baby wipes and cotton wool can still clog up a new pipe! Together we can keep our sewers running freely.

“You can view first hand the damage inappropriate items can do to a sewer by visiting:

“A leaflet detailing all the ‘Dirty Dozen’ gang can be found at :

Ravens Show Their Resilience In The Mournes