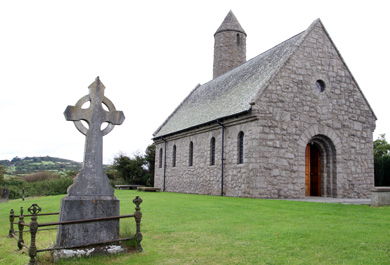 Saul Church is set to appear on the silver screen.[/caption]

The movie, set in contemporary Northern Ireland, features a mysterious gang that begins executing former combatants, thereby threatening the fragile peace and the future of the fledgling government.

Saul and the beautiful countryside overlooking Strangford Lough, provides a contrast to the mean streets of Belfast where a series of revenge killings are taking place.

The Church of Ireland building was used by the crew to film a memorial service for a group of victims.

Producer John Todd said that even in this most tranquil of settings, the tensions boiling in the plot of A Belfast Story were still evident.

He said: “We ‘adopted’ Saul Church for the movie. While the rector was busy with a wedding rehearsal and attending to ecclesiastical business, we used it to film one of the key scenes, as the First Minister’s young political aide is confronted by angry mourners. She throws the wreath down and storms off.

“The church is in one of the most beautiful spots in Northern Ireland and being there really helped calm the soul during the hectic filming schedule.”

Mr Todd enjoyed the process of producing his first Hollywood movie which was a labour of love.

He added: “We did the whole film ourselves, managed to get some of Hollywood’s best technicians on board. We see it as our prayer for Ireland. It is very emotional for us and something we really believe in.”

The film stars Colm Meaney as an old school detective asked to investigate a series of murders before he retires. Meaney brings a world weary presence to the central role as a man whose daughter was killed during the Troubles and is now called upon to protect the people he once hunted down.

As the past catches up with former combatants, the film builds to an exciting climax and has an intriguing twist at the end.

Authenticity was guaranteed by the use of local actors including Tim McGarry and Olivia Nash – Da and Ma from ‘Give My Head Peace’ – playing serious roles.

A Belfast story was released on September 20 and is being shown at Newry Omniplex. Further information is available at www.abelfaststory.com

Residents Evacuated After Fire At Home In Downpatrick