<![CDATA[ <p style="text-align: justify;">This Sunday see the County Camogie Finals take place at a venue unknown but at this stage they may be in Castlewellan. It also sees Castlewellan contesting the Junior Final for the first time since the reintroduction of Camogie to the Town. The team mainly consists of the girls who won a Down Under-12 title some five years ago writes Martin McClean. 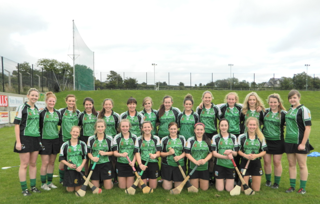 The Castlewellan camogs who will be playing in the County Junior final. [/caption]

The growth of the team has been phenomenal in the last two years from hardly winning a game last year to a team who lost only four games this year. Debra Croskery who captains and leads this team is delighted to be involved with this very young team. Many of them are fortunate to have pulled on the red and black for Down at Senior, Intermediate and Minor levels. We would ask that as many club members and supporters come out and support the Camogs in pursuit of their first Junior Championship irrespective of the venue. They deserve your support it what will be a big day for the club. The very best of luck to our Camogs and management.

The Under-14 and Under-16 Camogs completed their league and championship games for the year finishing on Tuesday against Bredagh with a defeat in the semi final of the Und14 championship. The young camogs have made great progress this year with a number of our players making the county teams at under 14 level; Rebecca Toner & Jade Hammond and at Under 16 level Nicola McCabe, Anna Rogan, Catriona Caldwell, Aisling Connolly, and  Aisling O’Neill.

On Saturday our youngest footballer’s took part in an Under-6 mini blitz against fellow Gaels from Bryansford and Dundrum. For a lot of the children it was their first time wearing the club green & black – special mention must go the Zach Kidd the youngest player representing the club on Saturday – Zach you have the makings already of a much better defender than your dad! On Saturday all the children performed brilliantly and can be very proud of their performances. 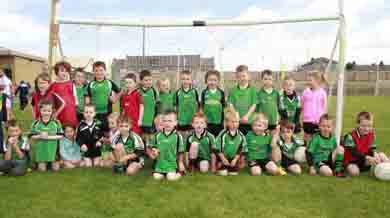 The U-6’s who took part in the blitz. (Photo by Brian Cunningham).[/caption]

As we approach the end of our Saturday morning summer training sessions all the coaches wish to thank the children for their hard work and their efforts, and hope you have all enjoyed the sessions. Details of our winter training programme will be available shortly. Training for the Under-6 group continues next Saturday in St. Malachy’s Park. Over the last two weekends we have collected almost £90 for the Donard Fundraising Group for Marie Curie Cancer Care – thank you to all whom contributed to this worthy charity. Finally a special word of thanks to all the parents whom contributed by bringing sandwiches, buns & cakes and assisted with serving refreshments in the clubrooms on Saturday morning to the team’s and supporters – your help is greatly appreciated by everyone in our club. Photographs of the day are posted on our website at www.castlewellangac.com.

The Under-12 Castlewellan Hurlers travelled to Ballyvarley on Thursday night and came away with the points after a very good performance. The town settled quickly with goals from Míceál óg Mc Veigh(2) and Paul Flynn. Míceál was in great form scoring five goals.  Ciaran Lowey and Dara Rodgers also goaled while Matthew McCabe, Callum McCabe and Eoin King had a grip on the game around the middle. Lorcan Cairns, Shea King, Fiachra Doyle and Joe O’Boyle were solid in defence in front of Morgan Croskery who had a fine game between the posts. Well done lads. Next game at home to Warrenpoint on Thursday at 7.00pm. All players please meet at 6.30pm.

The Under-14 Hurlers have qualified for their Championship Final this Saturday at 6.00pm. The venue has yet to be confirmed.  The lads have worked exceptionally hard and are rewarded with a place in the final. This is no more than this group deserve. We wish the players and management all the best of luck against Warrenpoint. We would encourage all parents to go along and support the lads. They need and deserve your support

The Senior Hurlers are in action again on Friday night in Páirc Esler in Newry at 7.00pm in the Junior Hurling Championship semi-final against old rivals Carryduff. Good luck lads. There have been many great battles against Carryduff and this one promises to be no different. Please come along and support the team in what will be a busy weekend for hurling.

There will be a Under-10 hurling blitz in Bredagh this Saturday. Castlewellan will be attending please confirm with your coaches the time that everyone will be leaving at.

Well done to the Senior Footballers who finished top of their Championship group with a win against Clonduff last Thursday night in Newry. Both Clonduff and the Town had already qualified for the quarter final stage. Everyone knows it does not matter where you finished in your group so long as you qualify. The business end of the championship will be in a fortnight’s time.

Commiserations to the Down Ladies Footballers who’s efforts to reach the All-Ireland Final came up short when they were beaten by a slicker Cavan team. We will say well done to Lisa, Orla and Kyla who all played a significant part for Down this year. They have been unlucky not to pick up championship silverware with the county this summer and hope their experience will help the Town in their Ulster Championship against the Antrim Champions at the end of this month.

The Attack Fitness Circuits will take place in The Club on Thursday evening of next week at 7.00pm. There will also be classes in St Malachy’s Park on Saturday mornings at 9.00am.

*   The Castlewellan AC weekly runs continue every Tuesday and Thursday leaving the Club at 7.00pm.

*   The first Castlewellan GAC Club Draw will took place last Saturday Night. The winners of the draw can be seen on our website at www.castlewellangac.com.