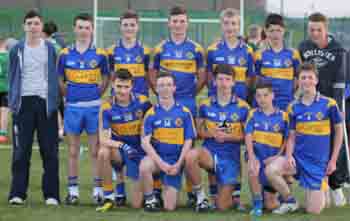 On Monday night Saul claimed the Seamus Fitzsimons Cup defeating An Ríocht in the All-County final 1-06 to 2-02.

The game between the East Down and South Down champions was played at Half time of the Down Senior Football Game between Downpatrick and Loughinisland in Newcastle.  The Óg Spórt competition is a 7-A-side U-15 competation.  In the earlier group stages Saul overcame Castlewellan, Aughlisnafin and Carryduff before defeating Loughinisland in the East Down Final. In the All-County final An Ríocht who claimed the South Down title defeating Glenn in the South Down Final opened up an early lead scoring 1-01 before Saul fired over two points to narrow the gap to leave the Half time score Saul 0-02 An Ríocht 1-01. [caption id="attachment_42014" align="alignleft" width="350"] 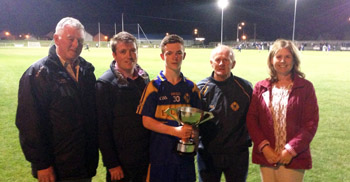 An Riocht opened the scoring in the second half with a point but Saul responded with a goal which leveled the game.  Saul fired over the next three points to put three between the teams.  With time running out An Ríocht fired the ball to the back of the Saul net to draw the sides level on the stroke of full time. Saul responded with the next score to claim the 2013 Down GAA Óg Spórt Title.