<![CDATA[ <p style="text-align: justify;">FIND out more about coastal rowing and how to get involved in it in Strangford Lough and along the Lecale coastline when Troon Rowing Club from Scotland bring their St Ayle’s Skiff on tour from Scotland later this month. 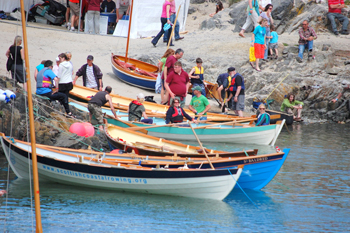 St Ayle’s skiffs are polular around the UK and Irish coast and Strangford Lough and Lecale Partnership in conjunction with the PSNI have launched an initiative to build a number for local use.[/caption]

“The Troon Rowers will share their experience of building and rowing their own boats. The rowers will explain how they have utilised boat building systems developed on the Scottish coast to help communities build rowing skiffs to a competitive racing specification.

“The rowers arrive in Portaferry on Friday 25 January and then travel to Ballywalter on Saturday and Ardglass on Sunday.  This is set to be just the start of an ongoing relationship between Scottish coastal rowing and Strangford Lough.

“Many people have already signed up to take part in the ‘Down Community Coastal Rowing Initiative’ and help build one of eight skiffs over the coming months for communities along the Ards, Strangford and Lecale coast.

“Among the volunteers are a number of boat-builders delighted to have the chance to share their love of boats and use their specialist skills for such a positive community project. Equally enthusiastic are the many competitive boating sportsmen in this area who will be keen to get their boat in the water and take on the neighbours! “

You don’t need any boating experience to take part. Whether you have a useful skill like joinery or if you just want to have some fun and meet new people, everyone is welcome. The only requirement will be to join the newly formed Down Coastal Rowing Club for a nominal fee of £5, to meet health and safety and insurance requirements and to provide a forum to keep everyone in touch with developments. The Club’s website will soon be on-line but in the meantime check out their Facebook page on downcoastalrowingclub.

“Come along to any of the venues below to enjoy a cup of tea and find out more about the Down Community Coastal Rowing initiative. You can take a good look at the St Ayle’s Skiff and meet the team behind the initiative, as well as Troon Rowing Club and Alec Jordan who developed the St Ayle’s skiff system.”

Friday 24 January between 4-7:00pm at the RNLI station Portaferry

Saturday 25 January between 10-5pm at the Eden Centre, Ballywalter

There will be limited opportunities each day to have a go at rowing the skiff and places are expected to book up very fast – if you are interested contact Gillian Armstrong at the Strangford Lough and Lecale Partnership office  in Portaferry  on 028 427 28886 / 29005.