Home Home Sinn Féin Go Up A Gear Opposing Brexit
Share
Facebook
Twitter
Google+
Pinterest
WhatsApp
Brexit has exposed the failure of partition and the strategic opportunity that now exists to end it must be seized, Sinn Féin’s Emma Rogan MLA has said.

The South Down MLA was speaking from The Mansion House in Dublin, where the official Irish Government celebrations were held on Monday to mark the 100th anniversary of An Chéad Dáil, the First Dáil Éireann which sat on 21st January 1919.

Ms Rogan said: “Brexit challenges all of the old assumptions about the previous constitutional, political and economic status quo in the North and South of Ireland. It has exposed the undemocratic nature and failure of partition in Ireland which created an artificial future which has and will remain contested.

“The prospect of Brexit in Ireland once again demonstrates the failure of partition, and further exposes the gaping democratic deficit inherent in a partitioned Ireland.

“Now on the centenary anniversary of the First Dáil there is an onus on the Irish government to plan for unity. To become a persuader for unity.

“To build the maximum agreement and for all nationalists, republicans and progressive forces to secure and win a referendum on unity so that we may establish a truly national, democratic Irish Republic.”

Political representatives in Dublin yesterday to celebrate An Chéad Dáil included South Down’s Chris Hazzard MP, Sinead Ennis MLA and Emma Rogan MLA.
Hazzard Says Border Protest Will Send Strong Message To London.
Sinn Féin South Down MP Chris Hazzard has called on as many people as possible to attend a protest against any hardening of the border at Carrickcarnon on Saturday.
The South Down MP said: “On Saturday, anti-Brexit lobby group Border Communities Against Brexit will be holding a protest on the Old Dublin Road at Carrickcarnon against any hardening of the border.
“There is widespread concern throughout South Down, and further afield, that the no-deal Brexit being pursued by hardline Brexiteers and the DUP will lead to a hard Brexit, which would be devastating for our economy and result in physical infrastructure on the border.
“It is important a clear message is sent to Theresa May that people here do not want to see any physical infrastructure on the border.
“It is also important the Irish government and EU 27 stand firm to protect the interests of everyone on the island of Ireland.
“I would encourage as many people as possible to go along and support this protest on Saturday at 3pm.” 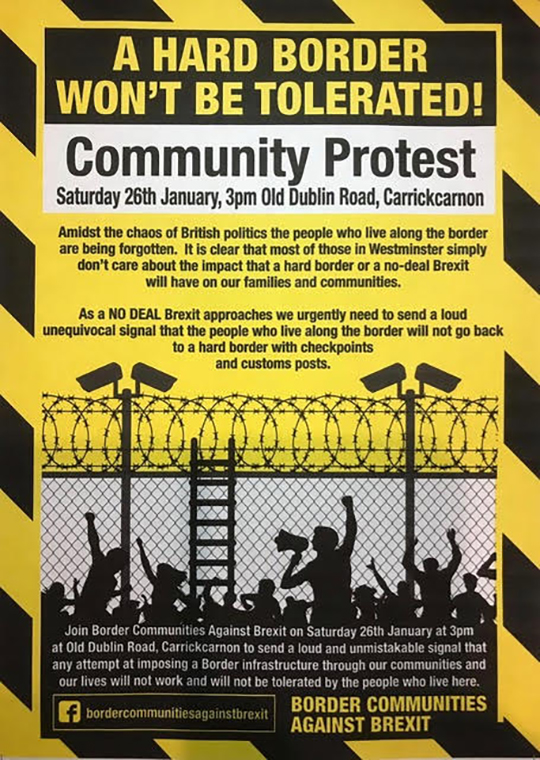