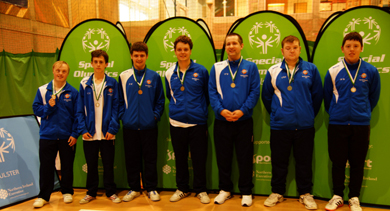 Shimna Stars were runners up in Division one in the Ulster Special Olympics basketball.[/caption]

Laurence McAlinden, Stars’ coach, said: “Seven athletes competed in the individual events and the other seven played out the final two league games. The recent weeks of training and preparation for the events proved worthwhile, as all seven individuals came away with awards in their respective grades.

“In the final two league games 3rd placed Shimna had the task of taking points from both league leaders NorthWest A and 2nd placed Ards Wizards. Shimna went into the games 1 point in arrears of Ards Wizards. The emphasis was on obtaining a bonus point (score 20 points) from either opponent and a win against Ards.

“ Although the result against NorthWest A, it was never in doubt. Shimna gave off their best and pushed the league winners to the wire. The 4th quarter saw Shimna play some great basketball to outplay and outscore NorthWest A 8 – 4. The confidence gained from this performance equipped the Shimna team well for the final game to decide the runners-up spot. This proved to be a cagey affair with Shimna winning the 1st quarter; quarters 2 & 3 were shared.

“The final quarter saw the superior fitness and finishing of Shimna at its best. Shimna outscored their rivals 8 -2 and went on to achieve a remarkable victory which saw them obtain 26 points and hold Ards to 18 points. This ensured that Shimna gained the victory, the bonus point required and they were crowned runners-up in the Ulster League Division 1.

Photos of Shimna Stars at Antrim

“Team: Sean Brannigan, Liam Hennessy, Glenn McBride, Niall Rogan, Patrick Hennessy, Peter Watts, CJ Hennessy. Thanks to all the athletes who attended and the volunteers, Anne, Rachel, Justyce, Mark  who accompanied them on the day.  And many thanks to all who have supported the athletes throughout the season at training or on match days.

“Shimna Stars Special Olympics wish to thank all those who have supported the club during the past year. Thanks to all who assisted with fund raising, sponsorship, travel arrangements the Principal and Staff from Shimna Integrated College for their ongoing support.

“Thanks to the local councillors who supported the Club in achieving a Sports Development Grant from Newry,Mourne and Down District Council.”