<![CDATA[FOLLOWING the news on Friday afternoon that the Special European Union Programmes Body had withdrawn funding from the Narrow Water Bridge project, South Down politicians were immediately up in arms. An irate South Down MP Margaret Ritchie called for joint Irish Government/NI Executive stewardship and financial sponsorship of  the building and management of Narrow Water Bridge. Ms Ritchie has spoken of the need to find an urgent solution speaking ahead of a meeting arranged on Monday 19 November  with the Deputy First Minister. She said: “Following the decision of the Special European Union Programmes Body on Friday afternoon to withdraw the letter of offer of funding for the Narrow Water Bridge project because no indications had been provided on how the shortfall in monies could be met, there is now a compelling need for the Irish Government and the Northern Ireland Executive to jointly champion and financially sponsor this North/South project. [caption id="attachment_39408" align="alignleft" width="375"]<a href="http://www.downnews.co.uk/wp-content/uploads/2013/05/narrow-water-bridge2.jpg"> 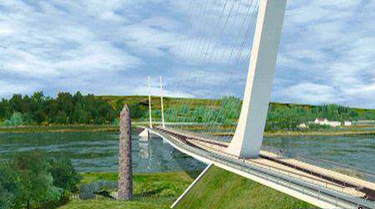 The Narrow Water Bridge funding offer has been withdrawn by the SEUPB.[/caption] “So far, neither government have publicly indicated if they were prepared to jointly provide the shortfall in funding.   However, I understand that at the recent meeting of the North/South Ministerial Council on Friday 8 November ministers (North and South) expressed their continuing support for the concept of the Narrow Water Bridge, and asked for an urgent analysis of the issues involved, with the priority being not to lose the EU funding involved. “According to an answer to a written question in the Dail on the 14 November from the Minister for Foreign Affairs and An Tanaiste, Eamon Gilmore, Ministers stated that they were resolved to continue to work closely and constructively on all of these issues with their Northern colleagues. “In light of this commitment, it is surprising that the SEUPB was allowed to make the statement of withdrawal of funding on Friday afternoon.  Nevertheless, there is now a need for clear evidence of this close collaboration to be demonstrated in a very pragmatic and dedicated way through joint inter-governmental stewardship, management and financial sponsorship of the Narrow Water Bridge project.   That is what the community of South Down and County Louth demand and deserve after their ongoing investment of effort and dedicated commitment and support in bringing forward this project. “In view of this Parliamentary commitment, there is now a compelling imperative for both the Irish Government and the Northern Ireland Executive to step in and lead on this important North/South project – Narrow Water Bridge to ensure the future economic development of the Carlingford Lough region.” Ms Ritchie also added that serious questions need to be asked about the Narrow Water funding withdrawal. She said: “With meetings planned in the next few days with the First and Deputy First Ministers and in the very near future and an expected meeting with the Taoiseach, it would have been obvious to await the outcome of these meetings to ascertain if the funding gap was going to be met. “While we are in no doubt that the problems with funding arose due to the underestimation in the costs of the project by Co. Louth Council, we were all in agreement, including the SEUPB, as proven by independent advice they sought, that the Narrow Water Bridge project would be an economic catalyst for the development of South Down and Louth, and was value for money. “The independent advice sought by the SEUBP clearly stated that even at the most pessimistic of evaluations the bridge at Narrow Water will provide value for money and indeed the travel benefits of the bridge have increased significantly between 2002 and 2013. This enhanced the travel savings benefits from €77 million to €100.2 million and would have a positive effect on the analysis for the project as the revised travel savings outweigh the additional construction costs. “The SEUPB have been premature in their decision to withdraw funding, and in doing so have taken the pressure of the NI Executive and the Irish Government to step in with the additional funding required that would bring this once in a lifetime economic opportunity to life, and provide the economic stability and tourism opportunities that would have flowed after the construction of the bridge. Why did this happen now?  Why make this statement in advance of the high level meeting on Monday 18th November?

Narrow Water Bridge Can Still Go Ahead  Says Ruane Sinn Féin South Down MLA Caitríona Ruane said that while she is disappointed at the withdrawal of offer from the Special EU Programmes Body (SEUPB) for the Narrow Water Bridge,  she believes that the project can still go ahead in the near future. Ms Ruane said: “I am obviously disappointed that SEUPB have withdrawn the offer at this stage, however, the project can still go ahead in the near future if the political will exists. Along with Sinn Féin Louth TD Gerry Adams, I attended the all-party convention called by Louth County Council this morning to discuss what needs to be done to ensure the project proceeds. “The funding necessary to make the bridge a reality was already in place. All that was needed was a commitment for a €6 million funding package from the Taoiseach and the Deptartment of Transport. “When Gerry Adams raised this issue with the Taoiseach in the Dáil this week, Enda Kenny said that he was in support of the project. I am disappointed that the Taoiseach’s actions did not match his words. “All of the parties in County Louth and County Down support the construction of the bridge. Sinn Féin along with other parties have requested an urgent meeting with the Taoiseach to discuss getting this project back on track. “At a time when the construction industry desperately needs investment this project can create 270 jobs for a relatively small investment by the government.”

SDLP MLA’s Aghast At SEUPB Decision To Pull Funding Offer South Down MLA Sean Rogers has expressed his utter disappointment at the news EU funding has been withdrawn for the Narrow Water Bridge Project. The assemblyman was speaking in light of a meeting he attended at Louth County Council of a cross party meeting, North and South, where there was total support for the meeting with the Deputy First Minister on Monday (November 18) and of a further meeting with the Taoiseach. Mr Rogers said: “This bridge would open up the economic gateway to South Down to develop the tourism potential. At the meeting today we saw staggering figures of the possible benefits of this project to the South Down/Louth area, ranging from £24million to over £100 million. “This has been an SDLP project for many decades and it is incumbent on everyone to do everything possible to ensure this project is delivered for all our futures.” His party colleague South Down MLA Karen McKevitt also expressed her deep disappointment saying: “it is a sad day for the people of South Down, the economy of the North and cross border trade. “The news is terribly disappointing for the people of South Down, Newry and the Carlingford region.  The Narrow Water Project has support from people around the globe.  What message is this news sending out – that our doors are closed for investment? “The SDLP has been campaigning for the Narrow Water Bridge for many years now. The idea for the bridge was first mooted back in the 1970’s and, since then, local activists within our community have been working to bring the idea to fruition. Activists such as Dr Donal O’Tierney; SDLP MP Margaret Ritchie and her predecessor, the late Eddie McGrady MP; former SDLP MLA PJ Bradley, along with the current SDLP MLA and Council team – have worked tirelessly on this project along with other political parties north and south of the border. Today is truly a sad day. “I would like to recognise the efforts of all at East Border Region,  Warrenpoint, Burren and Rostrevor Chamber of Commerce, Kilkeel Chamber of Commerce and both Councils over the last number of years to secure funding for the project. “A delegation from Newry and Mourne District Council, and others, are scheduled to meet the Deputy First Minister on Monday on this project, which should be interesting. We continue to recognise the tourism potential of this project and the benefits it could bring to the local area and will continue to the fight for the Narrow Water Bridge.”

Alliance Councillor Clarke Saddened At Funding Withdrawl For Narow Water Bridge Alliance Down Councillor Patrick Clarke has expressed his disappointment at the decision by the Special European Union Programmes Body to withdraw €17.4million in funding earmarked for the Narrow Water Bridge project. He said: ““Narrow Water Bridge has the potential to change the economic future of the Down area, opening up vast tourism opportunities and creating short term and long term jobs. “Earlier this year, construction on the bridge came very close to starting and this latest blow will serve as more disappointment to the surrounding community. “We need assurances that this project will be kept on the table. While the EU funding has fallen through, other potential investors might still come forward as the bridge still has great potential.”    ]]>