<![CDATA[ <p style="text-align: justify;">The committee and members of Russell Gaelic Union in Downpatrick regret the passing of Margaret Gilchrist, sister of our esteemed Secretary Colm McNeill and aunt of playing members Aidan and Tom McNeill. To Margaret’s husband Francis and children Damian, Nuala ,Anna and Fiona, to her mother Maud as well as the entire McNeill and Gilchrist families we extend our deepest sympathy.  Go nDeannaidh Día Trocáire ar a h-anam uasal. 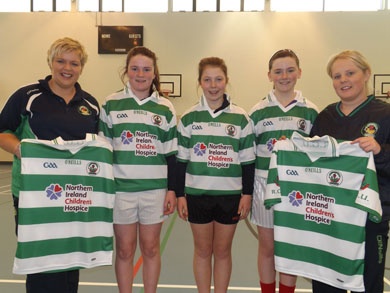 The U-12 Girls in RGU Downpatrick decided to go with the Children’s Hospice logo in lieu of a sponsor’s logo for their new jerseys. We hope that this helps to raise awareness and advertise this wonderful charity. Pictured are managers Edel Curran and Jenny Fitzsimmons along with U-12 players Ciara Hanna, Eilis Murphy & Cliona Sharvin.[/caption]

Well done to our U-14 footballer Eloise Crane who was part of the Down U-14 Ladies team which won the Ulster Blitz at Garvaghy on Saturday. Eloise played in all the matches and kept the scoreboard ticking over with some excellent scores writes John Murphy.

Advance notice for Cul Camp Summer 2014. The provisional date for RGU Cul Camp is week 2, 7-11 July. More details as soon as they are confirmed.

A date to keep in your diary for those who love a bit of theatre, the comedy play based in rural Ireland in 2001 ‘A Lock of Fierce Roars’ is coming to RGU on Saturday 12 April. Tickets £10. Contact Edel Curran on 07759 418 419 or any Executive member for tickets.