O’Neill Park, Dungannon, was the setting for the final of the Ulster League between Bryansford, Co. Down, and Glenullin, (Co. Derry). Conditions were a little heavy due to the early rain and a breeze, fluctuating in intensity, didn’t help. But that said, it was the Derry side who were first out of the traps and a point inside a minute seemed to settle their nerves writes Michael McCartan. 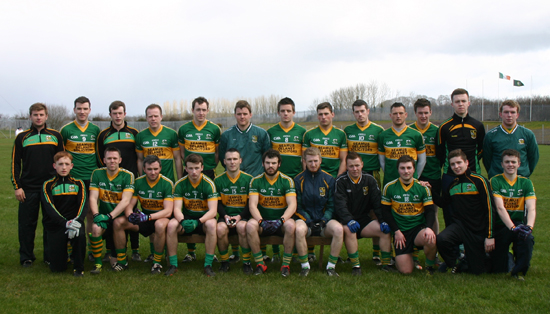 Bryansford for their part struggled to contain their free running opposition, who squandered two further opportunities inside the first five minutes.  However the Newcastle lads did manage to prevent Glenullin claiming any further scores until the eighteenth minute. 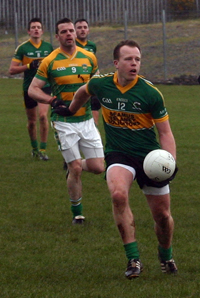 During this period and despite their mediocre play, the Ford were to amass five points Ciaran Brannigan (2), Chris Brannigan, Chris Clarke and Jim Magorrian. Unfortunately they were unable to press their advantage and failed to score during the following twenty minutes.

Glenullin’s, Neil Mullan and Neil Mc Nichol began to take control at midfield. Aided by their half forwards they controlled most of the break ball which instigated a fight back over the second quarter of the half. Four points accrued with full-forward, Eoin Bradley, proving to be a considerable thorn in Bryansford’s side. Aaron Somers did well to counter this threat but Bradley was always dangerous, setting up scores, for Mullan and Leigh Mullan, or taking them himself (2).

All square at five points apiece at the interval and an interesting second half beckoned. Everyone expected the Ford to ‘up their game’ but Glenullin sought to spoil the party with three quick points, Bradley, Brian Mullan and James Mc Nichol.

It would be twelve minutes before the Ford would fire their first shot in anger, which sailed wide of the target. A free by Chris Brannigan did however split the uprights just before Ciaran Brannigan pounced on a parried save by keeper Eoin Mc Nichol to drive the ball high into the net and with fifteen minutes left the Ford were back in the lead by the narrowest of margins. 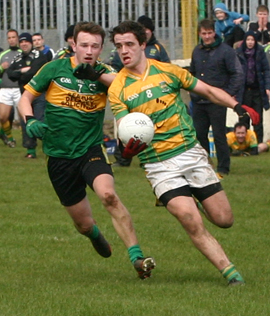 The Derry lads appeared to be more astute in gaining frees which highlighted a naivety in this area of the Ford’s play.  Bradley used this advantage to send his side ahead with two points in less than two minutes. In the fifty-third minute, David Mc Kibbin received a black card to add to his earlier yellow and the Ford were down to fourteen men and one point adrift. This however added impetus to the Down lads attack and Chris Brannigan levelled, 0.10 to 1.07, with three minutes remaining on the clock. Both sets of supporters were to witness a thrilling end to the match as both defences were tested to the full but held out to send the game to extra time.

The first period of additional time remained all square; single point from each side, Bradley and Ciaran Brannigan, the only chances that arose in a half dominated by Glenullin. When the second period of extra time commenced it was Bryansford who looked the more dangerous. Two points from Chris Clarke gave the Down lads the lead but Bradley kept threating and with three minutes remaining he reduced the deficit to one. A minute later the tie was level again. A contentious free was awarded out near the side line and Neil Mc Nichol pointed.

Bryansford were battling to forge forward but with seconds left gave possession. Cleared down field the ball arrived with Bradley who launched the ball on a high trajectory from over thirty yards. Bryansford hearts were broken as the white flag was raised. The scoreboard read 0.14 to 1.10 and  referee, Francie Gallagher (Co. Tyrone) whistled to signal the end of the game.

In his post-match  the Glenullin manager said: “I watched Bryansford last week when you destroyed Slaughtneil and I can tell you I was worried.  I’m obviously very proud of my lads but I’m proud of you (Bryansford) because it took a lot of hard work to beat a team of quality.”

Unfortunately his words of praise, although appreciated, did little to salve the broken hearts of the Ford faithful.