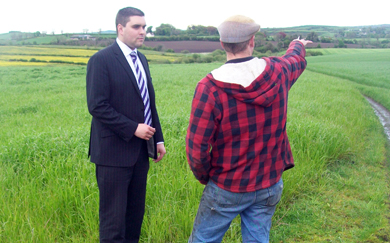 UKIP representative Alan Lewis has met a number of farmer a cross Down District during his cavass for the Slieve Croob area local government election.[/caption]

He said:  ” I have been canvassing across Slieve Croob this past few weeks I took the opportunity to visit local farms. I believe  UKIP is the only party which can deliver for farmers across Newry, Mourne and Down. I would appeal to farming families to use their vote wisely, by electing a UKIP councillor, giving local farmers a direct link to what will almost certainly be the largest UK party in the European Parliament.

“When we leave the EU – and we will – UKIP will operate a UK Single Farm Payment Scheme, tailored specifically to suit local farmers.  No farmer will be worse off than at present. And it will be a scheme free from the burden of Brussels bureaucracy, cross-compliance measures and red tape.

“Whilst some other parties might promise that too, as a truly national party, UKIP is the only party which can deliver it. At this election by putting UKIP first, farmers across the area can put themselves, their family, their industry and their country first. I pledge to use the benefit of a full UKIP team in Brussels to help local farmers.

“And until we do leave the EU, UKIP will ensure that Northern Ireland farmers get a fair share of European money and assistance. My party colleagues will continue to fight day and daily against Brussels interference on our farms and for the right of local farmers to do what they want to do most… farm! I have the enthusiasm to fight for you, give me the platform to do it !” added Mr Lewis.