<![CDATA[ <p style="text-align: justify;">This was another successful evening at the Lyric Theatre as the cast of the Northern Ireland comic thriller ‘Demented’ wooed the audience with their punchy  and at times adult humour. There were ripples of laughter throughout the audience from early on through the evening showing the audience had engaged with Gary Mitchell’s play from the onset. 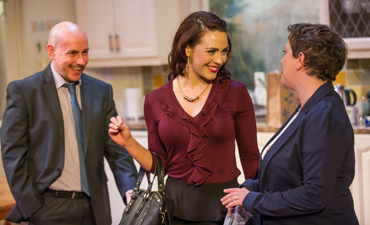 Felicity in her element exchanges words with Stacy as Justin looks on.[/caption]

Roy Heaybeard (James) played the challenging role of a father at the early stages of dementia and much of the humour emerged from the fact he did not recognise his own son, Andrew (Ian Beattie).

The action focusses around James’  family and the family of the bank manager Justin, (Richard Orr). James, Andre and Keith, hatch a madcap plan to rob the bank by holding Justin’s family hostage. Felicity (Roisin Gallagher), Keith’s partner, plays out the sexy, feisty woman looking for a better life. The three would-be robbers decide to go out out in Butch Cassidy and the Sundance Kid style style armed with sawn-offs.

As the plot escalates, Andrew is finally drawn into this one final effort to break away from the drudgery of material poverty. He is the loyal son looking after his father yet his father does much of the time not recognise him. At times the pacey action verges on farce but it is extremely well crafted by director Richard Croxford. The play certainly moves at an excellent pace and the audience are swept along by the swift scene changes between James’ living room and the kitchen in Justin’s home. The humour is largely Northern Irish

Felicity flirts with Justin and he is seduced by her charms, a fatal flaw. Stacy  (Jo Donnelly) Justin’s wife, played an excellent part as a long-suffering wife with her temper flaring and suspicions in overdrive. Her dope smoking son Joshua (Gavin Peden) who has issues with school attendance will also resonate with many parents as a theme of the society the play is set in. 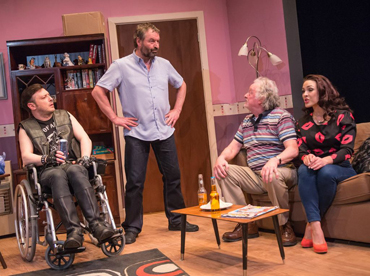 Keith, Andrew, James and Felicity plan the heist on the bank.[/caption]

Michael Liebmann playing Keith too performing well from his wheelchair. The trio decide to get a million pounds from the bank and succeed. But it is the change of heart of Felicity who absconds with the money en route to Brazil who returns to her beloved Keith and the touching scene at the end when Andrew lovingly kisses his father’s head that the audience realises that they are all locked in relationships and money cannot change their destinies. James’ memory is gone and Keith cannot walk and others are locked in to this reality.

The actions of the three to salvage some dignity from a ‘Demented’ lifestyle falter as they discover their inner realities of love and responsibility.

From one minute to the next director Richard Croxfor said: “You never know what will happen” such is the hilarious mayhem on stage.

But Demented is a play that also touches us all as we recognise the existential pressures we live under of health and wealth.

The cast gelled brilliantly in this domestic styled comedy – but it is more, containing a statement about the darker and real side of life. It is a form of Platonic love in the end that reigns supreme over the need to fullfil desires for wealth and opportunity that people may fantasize about.

Demented runs until the 24th May at the Lyric Theatre Belfast.