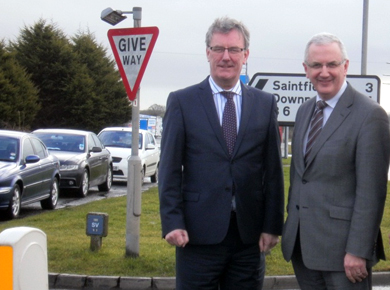 Strangford UUP MLA Mike Nesbitt and DRD Minister Danny Kennedy at the Temple roundabout.[/caption] Mike Nesbitt MLA has welcomed news that Ulster Unionist Transport Minister, Danny Kennedy MLA, has confirmed that he has asked officials to bring forward the scheme for a new roundabout at Temple Crossroads as quickly as possible. Mr Nesbitt said: “I recently met with Minister Danny Kennedy at Temple Crossroads so he could see for himself how the junction is in much need of improvement to make it safer for road users. “He pledged at the time that he would discuss the options for improving safety at the crossroads with his Departmental officials without delay. I am delighted that he has now moved so quickly to set the wheels in motion.”

Post-Primary Admissions Announcement From The EA