<![CDATA[ <p style="text-align: justify;">Last Wednesday The reserve team were at home to Saval on Wednesday evening. After a slow start the blues got to grip of their opponents through some good work by Captain for the day Dominic McClements.

Seamus O’Hare got through a lot of work and kicked some nice scores ably assisted by Paddy McKenny. Conor Megoran and James McClements were proving to be a handful for the Saval defence with the elusive Megoran bagging a goal. Peter Cochrane also raided up the field to goal.

Saval regrouped at half-time to really take the game to Loughinisland, but the home team held firm with Hugh Donrnan outstanding in defence. As the half wore on manager Sean Digney added some experience to the mix by bringing on Alan Molloy and Gary Mason. This pair of golden oldies showed they have lost none of their craft as they steadied the ship.

Matt ‘Gooch’ Nugent kicked the final score for Loughinisland to record a great win with the score line 2.13 to 1.10. 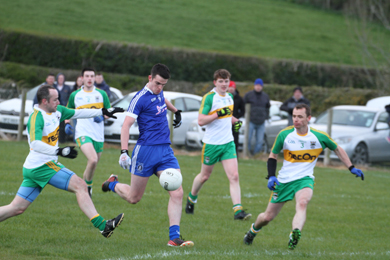 Loughinisland proved too strong for An Roicht in the early season encounter.[/caption]

Following on from last Monday’s good opening league win against An Riocht, the seniors continued with an impressive victory over Attical. Rory Mason started the scoring quickly followed by points from John McCarthy, Conor O’Reilly and Johny Flynn. Attical were not going to give up easily and a goal and a point kept them in the game.

However, the blues hard work and running off the ball kept them in touch and midflied domination from Flynn and McClements supported by man of the match Conor Killen the blues settled into their rythem and and further scores from Aaron McClements (Two), Rory Mason, Megoran, O’Hare and further scores for O’Reilly and Mason left the half time score at Attical 1.3 Island 0.12.

The second half seen the blues dominate proceedings and with Dan Gordon and Philip Martin dominant in defense further scores from McCarthy extended the blues lead when the game was killed off as a contest with a goal from the vetren Seamus followed quickly by a goal from the impressive megoran the blues were well ahead. A further 1-1 from full forward Megoran closed the game of and a point apiece for McKenney and O’Hare give the scoreline the dominant look that the blues deserved –final score Full time 3.16 to 1.7. Next up St John’s Bosco (Home) this Friday.