Irish Cup Round One

This Irish Cup first round match started off with Killyleagh pressing forward but Bryansburn too showed their teeth and it was the Burn forward John Mahoney who took took the first goal in ten minutes by picking up the ball in centre field and running on and taking a volley from 40 yards to the top left, unreachable for Killyleagh keeper Alastair Coburn. 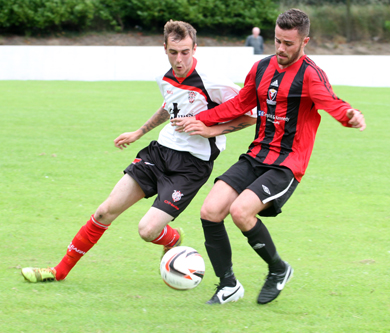 Aaron Carberry, left, played his part in the Irish Cup first round win over Bryansburn. [/caption]

Killyleagh had done so far much of the early attacking but five minutes later Killyleagh suffered a hammer blow when Burn captain Stewart Morrison got possession of a ball lobbed into the Killyeagh goal area by midfielder Matthew Sturry and he slotted it into the net stunning the home side.

Killyleagh responded by an immediate challenge and were determined to pull back the difference and the fist opportunity came in the 19th minute when Aaron Carberry charged the Killyleagh goal passing the defender and shooting but the ball was saved by the keeper only to bounce off a defender for an own goal.

Both teams were then attacking and the game opened up, but Killyleagh had a score to settle and won several corners with their sustained pressure. But in one corner Dylan Carberry reached the ball in a goalmouth scramble and put it into the back of the net making the match all square again in the 25th minute.

Killyleagh continued to explore opportunities and were pressing forward and Stephen Kennedy had a fine run down the left showing Bryansburn were vulnerable. But this was a fairly open game when both sides could have scored and Beyansburn too were creating a few opportunities. 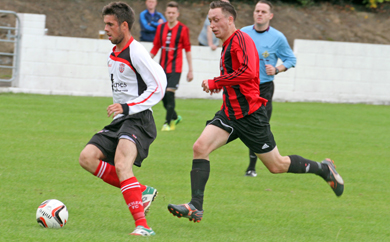 Killyleagh made much of the running the this Irish Cup first round clash with Bryansburn. [/caption]

Just as the half-time whistle was to blow, a volley from a Bryansford forward saw the ball rocket to the top bar of the Killyleagh g0al and Dylan Carberry leapt up and appeared to push it over the bar, but it was in fact over and this certainly caused a flurry among the spectators fearing momentarily he would be sent off.

The second half was a lively affair with Killyleagh’s Aaron Carbury making a big impact on the play up front on the left opening up chances with his strong tacking style.  He had one early near goal when he took on three defenders and hit just wide of the post.

Bryansburn were holding their own and Phil Tyson showed they were ever dangerous when he unleashed a volley from just outside the box which was just inches over the top bar.

But it was Killyleagh who sustained much of the pressure on Bryansford looking for that golden goal to take the lead. The forward line was working hard and had several near misses such as Aaron Cheevers putting through to Aaron Carberry whose shot was just held by Bryansford keeper Gavin Robb who was having a good game. 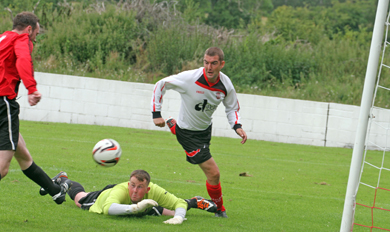 The ball bounces off Bryansburn defender Ricky Thompson for an own goal to get Killyeagh back into the game after going 2-0 down.[/caption]

However, midway into the second period, Killyleagh took their foot off the pedal and allowed Bryansburn to push them back causing problems as they could not break forward quickly enough to take the pressure off. There was a great play when sub Stephen Kennedy passed through to Aaron Carberry but again the keeper smothered the shot.

Twenty five minutes had ticked by in the second half and the game started to fizzle out as there were stoppages for a couple of injuries and the pace had been quite hectic.

But Bryansburn gave away a few corners at this stage of the game which turned round again as the home side drove on. Killyleagh had a near miss when Kennedy crossed to John Murray who tried some fancy footwork to slot the ball into the Bryansburn goal His timing was a bit off but it was an excellent effort showing Killyleagh could play creative entertaining football.

Extra time was looming and a sense of urgency was injected into the game. Bryansford were always in danger of nicking a victory as the game hung 2-2 and sub Andy Thompson volleyed from the ball just missing the goal. At this point Killyleagh looked as though they had lost their zip and needed to light up their game. They got a few minutes respite when a fast attack from sub Scott Greaves and Aaron Carberry saw the Bryansford keeper injured.

Killyleagh surged back to life in the closing minutes facing the prospect of extra time with their team already quite drained. They won a corner and John Murray hit a long ball through the defenders to Aaron Cheevers who knocked it low into the keeper’s box where Dylan Carberry popped it into the Bryansburn net in the last minute of the game to steal the match.

Bryansburn had fought well but this was not to be their day as Killyleagh took the honours in a match that could have swung either way.