A hundred plus competitors gathered as part of the competitive league event and Darren Brown, who manages the Killyleagh Ophir Karate Club said: “We were delighted once again to organise this very prestigious event on behalf of the Wado Karate Association of Ireland. 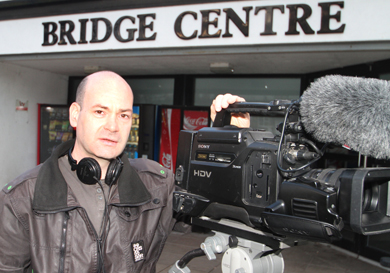 Darren Brown, third dan karate black belt, received a body blow when he dicovered that the Bridge Centre did not have wi-fi which as a result blocked the live streaming of the third annual All-Ireland karate competition in the centre.[/caption]

Competitors, accompanied with their families and friends, from as far away as Carlow came along to take part in the event. There was standing room only as the Bridge Centre was packed out. We had two areas (tatamis’) working so there was plenty of action from 11am right through to 5pm. In the morning, we started with the kata categories (Traditional set pieces) then later in the afternoon, the Kumite (free fighting) took place.

“The whole idea behind this league competition structure is to help prepare our students for European competitions. In fact we had eight European medalists taking part in this event which was fantastic”

Everyone involved were very excited as the event was setup to be streamed live across the World. Between the bouts and during the break promotional videos of Killyleagh, Strangford and the Lecale area were going to be broadcast. However, Darren explained: “We hit a serious hitch. I discovered that there was no broadband connection at the Bidge Centre and we could not stream the event live without wi-fi. 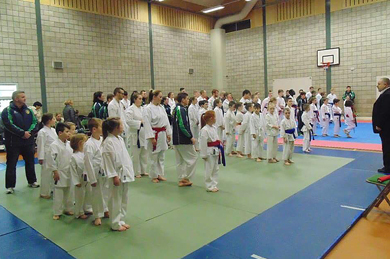 Some of the junior competitors line up before the action.[/caption]

This was a hard blow as I had publised the event and there were people across the World from America to Australia ready to watch it. In fact over 500 had logged on but to no avail. It was disappointing but maybe we will get this sorted out for the next big event. The Bridge Centre is an excellent venue and the staff are second to none. Down Council have also been very supportive of the Club over the last number of years both financial and in acknowledging its achievements at European level.

“These type of sporting events with live streaming have huge potential to promote County Down and local tourism etc. We missed the boat on that one, but will get it sorted hopefully next time round. There is a very substantial online demand for such events. Competitions held in other centres around Ireland are filmed and clips are put on You Tube but this would have been the first live streaming of a karate event in Ireland.”

Overall, Darren and his team of twenty officials, including the All Ireland Senior National Coach Sensei Derek Desmond (6th Dan) had a great day and the event ran well.

The Ophir Karate Club runs in Killyleagh in the Bridge Centre from 7-8.30pm each Thursday and new members are always welcome.

Killyleagh Councillor Billy Walker explained: “I think that Darren and the Ophir Karate Club have been great embassadors for Down District and for Killyleagh. It is unfortunate that there was no wi-fi at the Bridge Centre so he could stream this event live.

“I will be talking to council officials about this and try and get wi-fi installed given that so many people now have SMART phones and other devices. It all boils down to cost but I hope we can get this resolved. All big centres in the Council area should have wi-fi. This would be a excellent service to provide locally across Newry, Mourne and Down area.”

To view a promotional clip of Killyleagh, go to: