<![CDATA[ <p style="text-align: justify;">A new exhibition featuring stunning images of the local landscape and key historic sites, captured by photographer Patricia Pyne, will opened on Thursday 20 February in the Down County Museum in The Mall in Downpatrick.

In early 2014, Down County Museum Commissioned fine art photographer Patricia Pyne to photograph a selection of early Christian and medieval sites in County Down. The results are displayed in the dramatic and thought-provoking exhibition which captures the hidden beauty of our ecclesiastical heritage. 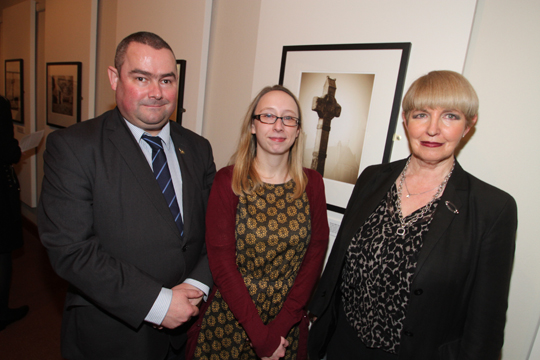 Councillor Terry Andrews with Down County Museum Keeper of Collection, Victoria Millar, and photographer Patricia Pyne at the launch of her exhibition, The Power of Place.[/caption]

“Patricia is a graduate in Medieval and Modern Languages and Associate of the Royal Photographic Society. She has developed a reputation as a stylish and creative photographer, with a breadth od subject covering all of Ireland but dealing mainly with the ancient Province of Ulster.

“Whilst her particular interests lie in the history of photography, she approaches her work with a modern sensibility, playing a key role in the exploration of the medium as an art form.

“Her work has previously been displayed in a number of venues including Down Arts Centre and the LInen Hall Library in Belfast.”