<![CDATA[ <p style="text-align: justify;">Further to the recent arson incident at McLaughlin House on the Saul Road in Downpatrick, the NI Housing Executive are keen to curb anti-social behaviour.

The Housing Executive is concerned at the latest incident at McLaughlin House, Downpatrick. Earlier this year the organisation carried out a £15k refurbishment of McLaughlin House following a fire. 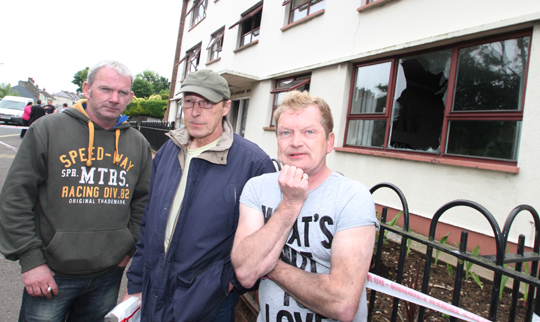 Michael Graham, Michael McKinney, and Ciaran McPoland, three residents of McLaughlin Building were forced out of their homes last year due to an arson attack in Downpatrick’s Saul Road.[/caption]

The local office’s team has been in contact with all tenants following this latest incident and asked them to remain vigilant.

McLaughlin House operates a door entry system with a security call panel providing controlled access to the six flats. This ensures only tenants and those to whom they grant access can enter the communal areas. Additionally, only residents have keys for the back door of the building. Furthermore, each of the individual properties in McLaughlin House is fitted with a fire alarm.

The Housing Executive recently arranged for an independent fire risk assessor to look at McLaughlin House. Some minor recommendations were made all of which have been implemented.

Housing Executive Area Manager Loma Wilson, said: “I was angered to learn of this latest attack on McLaughlin House and would encourage anyone with information to call the police in confidence on 101. It is vital the perpetrator is caught.

“With regards anti-social behaviour the Housing Executive actively works to resolve problems through early intervention and mediation. This approach is often successful, preventing the need for more serious action to be taken. We want to work closely with the local community to ensure no further incidents occur at McLaughlin House and we nip problems in the bud across the area.

“I would encourage people to report incidents as and when they occur; unless we know about them, we cannot tackle a situation.”

The Housing Executive’s local office should be contacted on 03448 920 900 in the case of noisy and disruptive tenants, neglected gardens, illegal structures, dog nuisance and the use of our premises for business or illegal purposes. In the case of incidents such as criminal damage, assaults, violence, intimidation and public drinking the public should contact the PSNI on 101.

Where there has been a hate incident both the Housing Executive and PSNI can be contacted and in the event of behaviour such as littering, dog attacks, waste dumping and vermin the local Council should be contacted.