<![CDATA[THE 2013 St Patrick’s Day celebrations in Downpatrick was a fabulous success as the huge cross-community crowds came out in their tens of thousands to support all the events across the whole weekend. Celebrations galore were in full swing at Down County Museum with Irish dancing, traditional and folk music and lots of family entertainment. Steam trains brought large number of visitors on a wonderful journey from Inch Abbey into Downpatrick providing all with a ‘birds eye’ view of this historic ancient town. Large numbers also used the park-and-ride facilities at Downpatrick Racecourse which proved very successful. [caption id="attachment_37270" align="alignleft" width="390"]<a href="http://www.downnews.co.uk/wp-content/uploads/2013/03/st-patricks-day-2013_31-copy.jpg"> 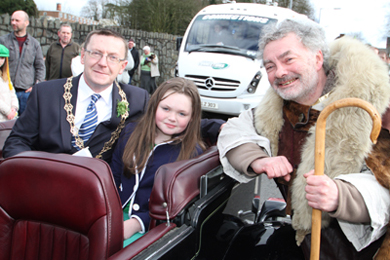 Down District Council Chairperson Councillor Mickey Coogan with his daughter Cora chats to St Patrick just before the parade begins in Downpatrick.[/caption] The Saint Patrick Centre was a magnet for everyone who wanted to soak up the heritage and culture of Ireland’s patron saint on this special day with Irish Dancing displays, storytelling, acrobats, jugglers and the ever popular traditional and folk music. New for 2013 was the street music competition which was a tremendous success with a mixture of genre’s including a Beach Boys medley to entertain the crowds as part of the festival theme `Name that Tune’ supporting the UK City of Culture, 2013, Derry-Londonderry. Also new this year was the Artisan Food and Craft Market which offered local provenance in a traditional style market. The festival stage entertainment, hosted by Johnny Hero and Pamela Ballantine with their U105 Roadshow led the celebrations in St Patrick’s Square with loads of competitions prizes and giveaways on offer. Jarleth Henderson and Band received a fabulous welcome on stage with traditional uilleann pipe music to entertain the crowds. The vibrant and energetic cross-community carnival parade with over sixty extremely colourful floats was the centrepiece of the celebrations. Float Parade prizes went to  1st & 2nd Downpatrick Scouts with their colourful float celebration of 50 years of Scouting in the theme of `Charlie and the Chocolate Factory’, Pawzitive from Crossgar, Naiscoil Dhun Padraig, Downpatrick, with their theme `Molly Malone’, Cancer Research UK with characters from the film `Sister Act’ and Dramability with `Rainbow’ songs and tunes.

LINK TO VIEW THE DOWNPATRICK PARADE PHOTOS AND MORE

Samba Band and Cheerleading Dancers to name but a few illustrated the hugely successful cross-community and ethnic inclusion of this event. They all really enjoyed themselves along with the quick witted commentary provided by Johnny Hero and Pamela Ballentine kept the thousands of waiting crowds informed and entertained as it snaked its way into the centre of  the Downpatrick. The annual pilgrimage walk from St Patrick’s Church, Saul to Down Cathedral was extremely well attended as was the St Patrick’s Day Walk through the quiet country roads and green lanes. The Interdominational Service and Wreath Laying ceremony at St Patrick’s Grave was a spiritual occasion admist all the festive family fun. [caption id="attachment_37271" align="alignright" width="400"] 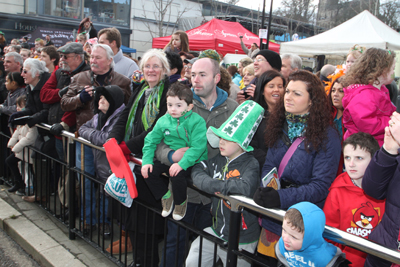 A section of the crowd looks on as the parade passes by in Downpatrick.[/caption] The extended weekend programme didn’t stop there as winners of the Street Music competition took the stage to showcase their talent, followed by the fabulous Four Men and a Dog & First Light supported by Castlewellan Comhaltas Ceoltoiri Eireann with their eclectic and vivacious blend of traditional Irish songs and music ending off the evening. Monday saw the traditional pilgrimage prayer walk from Saul to Down Cathedral followed by the ever popular St Patrick’s Day walk through St Patrick’s Country and the cross community service at Down Cathedral followed by the laying of a wreath on St Patrick’s Grave. The final concert in the celebrations was the fabulous Eimear Quinn who enthralled the audience in Down Cathedral and provided the perfect wind down from the celebrations. Winners of the Street Music Competition were: Le Cheile,  Sioda, David Brown-Murray, Niamh McDowell, and Cairde who all received cash prizes.]]>