<![CDATA[THE skies will be buzzing over Newcastle this summer with the return of the popular Red Arrow air display in the Festival of Flight. Down District Council is delighted to announce that the forthcoming Festival of Flight on Saturday 10 August in Newcastle will be a ‘five star’ attraction. Down News can confirm that the Red Arrows will return to the fantastic arena of Dundrum Bay and will be joined by the amazing Typhoon which was so popular at last year's event. Commenting on the forthcoming displays, Flight Director Jeff Salter said: "There will be three further jet displays which will make this years event the fastest and most exciting yet with five of the most iconic jet aircraft dating back to the 1950’s. This will be the largest collection of jets in one display that Northern Ireland has seen in a dozen years!” [caption id="attachment_37266" align="alignleft" width="390"]<a href="http://www.downnews.co.uk/wp-content/uploads/2013/03/Red_Arrows.jpg"> 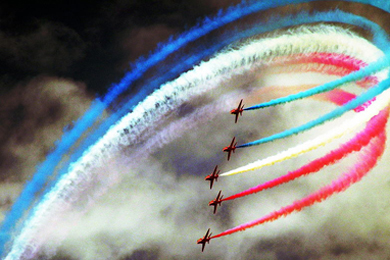 The Red Arrows will be returning to Newcastle’s skies this summer.[/caption] With more details to emerge in the coming weeks and months it certainly is a date worth noting in your diary. We are also delighted to continue the partnership with the Kilkeel-based company, B/E Aerospace who have helped to drive this event to new heights. The company will be the headline sponsor of Down District Council’s enormously successful ‘Festival of Flight’ which will attract tens of thousands of visitors to the seaside town in August. The Festival of Flight has emerged as one of Northern Ireland’s major festivals which draws huge crowds in excess of 100,000. The spectacular air displays are the major event alongside numerous exhibitions, music, street entertainment, vintage vehicles and finishing with an open air concert on promenade in this crowd-pleasing event. The overall extended programme will deliver themed family entertainment from Saturday 3 August to Saturday 10 August. Neil Cairns, Vice President and Managing Director of the B/E Aerospace plant at Kilkeel, which manufactures seating and interior products for the global commercial airline industry, is delighted to help the event take off.  He said: “As one of the area’s largest private sector companies employing over 650 people, we have a huge stake in the local community and we are pleased to support an event which is clearly so important to the local economy. “2013 has brought a strong focus on the value of tourism to the economy, now and in the future, and events such as this, play a vital role in increasing visitor numbers as well as giving families a great day out. For generations Newcastle has been a tourism hotspot and we congratulate the Council for continuing to invest in its success.” Down District Council Chairperson, Cllr Mickey Coogan welcomed the involvement of B/E Aerospace and added, “We are delighted to continue our commitment to working with the private sector by retaining one of the area’s major companies as a key partner for the Festival of Flight in 2013.  This association builds on a successful relationship instigated in 2011 and is a great vote of confidence in this fantastic festival. “Thanks to the support from B/E Aerospace, coupled with the superb input of finance, time and enthusiasm of local traders and small businesses in and around Newcastle, Down District Council has been able to sustain and indeed further develop the Festival of Flight. The support of local businesses, large and small, is central to the success of this much-appreciated element of our strong Summer events programme. Together, we look forward to an event which will have a positive impact on the local economy.” With planning well underway for this spectacular event, Down District Council’s Events Development Officer, Ann Moreland has been working on the programme since October 2012 in order to develop and extend the air displays and said:  “We are thrilled to announce that the Red Arrows will be once again gracing our skies with their breathtaking and inspiring aerobatic displays. They were sadly missed in 2012 so I know that Newcastle and its visitors will be ready to welcome them back in August. The programme includes five jet displays, so keep an eye on the local media as more information is released in the coming weeks and months ahead. Our packed programme will have something to entertain the whole family and of course the festival entertainment is free”. Information about all the events in the 2013 Festival of Flight will be available shortly at www.downdc.gov.uk, www.facebook/DownFestivals.com. Contact our Festival Office on 028 4372 2222. To find out more about B/E Aerospace visit www.beaerospace.com]]>