<![CDATA[JIM Shannon, MP for Strangford, speaking after the meeting with First Flight Wind in Portavogie to discuss the offshore wind windfarm proposal, has said that they  made it clear that the fishing sector in Portavogie was totally opposed to the designated location of the development. [caption id="attachment_32374" align="alignleft" width="360"]<a href="http://www.downnews.co.uk/wp-content/uploads/2012/09/Jim-Shannon-1.jpg"> 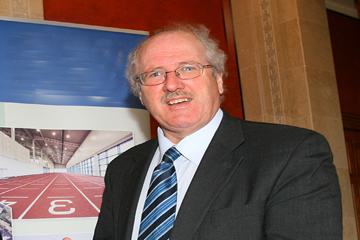 Strangford MP Jim Shannon has joined fishermen in Portavogie in opposing the proposal of a marine windfarm of the County Down coast.[/caption] He said: “First Flight  presented their case through staff Jack Farnham, Mike Harper and Sacha Workman, but it just did not convince the fishermen that were present. Many of the fishermen there stated that the proposed area is vitally important for their future viability in the winter-months as 60-80% is the percentage of time that they spend fishing the area which contributes a critical part of their jobs and business. “First Flight Wind said that trawlers will be able to fish between the turbines although the turbines have a 50m exclusion zone around them. The clam fishermen present also expressed concern that the proposed wind turbines would impact upon their fishing section and there was further concern expressed that the data that had been used did not include the information of the under 10-metre fleet. “The meeting concluded by stating that the fishing sector has not been convinced that the wind turbines will not lead to them losing their livelihood from productive nethrop  (prawn) fishing grounds. They are to collate the information and to present and come back to the elected representatives,and I do really hope that First Flight Wind address these important issues. It is clear that the wind turbines cannot go on this important fishing section in the Irish Sea and if they do it will be severely detrimental to the fishing sector which cannot be tolerated,” added Mr Shannon.