<![CDATA[ <p style="text-align: left;" align="center">It’s one of the most popular events in the Army Cadet calendar and, famously, one of the toughest. 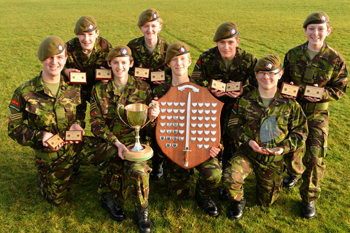 The Annual Irish Guards Military Skills competition, affectionately known as the ‘Mini Micks’, challenges Cadets to a gruelling weekend at Magilligan Training Camp where they are tested in a variety of skills including First Aid, drill, map reading, leadership, fitness, turnout, military knowledge and regimental history.

Excelling in the ‘Mini Micks’ requires an energetic combination of skill, determination and commitment, for the honours don’t come easily! Demonstrating all those qualities – and more – was the team from Ballygowan Army Cadet Force Detachment which emerged as the overall winner of the competition.   .]]>

Grants Available For Tourist Events In Ards And North Down

Brown Calls On Another Improvement To Crossgar Crossing