<![CDATA[ <p style="text-align: justify;">Aughlisnafin Ladies had a comfortable win over visitors Killyleagh in their first game of the season. Their next match is at home to Loughinisland this Saturday at 7 pm.

The U-14 boys got their division 2 campaign off to a good start with a gritty win over Drumaness. Drumaness led by the minimum at half time but a strong second half display by the ‘Fin saw them win by six points. Final score Drumaness 5-10 Aughlisnafin 8-7. Scorer’s for the Fin were Eoin Lundy 4-3, Cathal Murphy 3-2 and Oran Flanagan 1-2. Next match is at home to Darragh Cross. The U-14’s will also travel to Pairc Esler on Easter Monday for the Down GAA Féile Peil na nÓg. 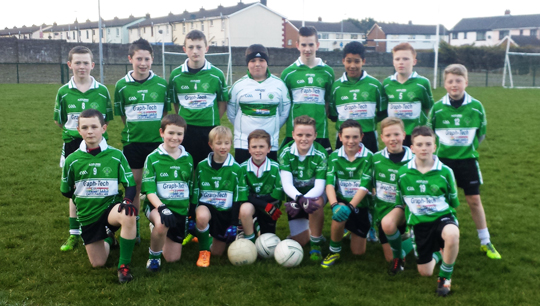 The U-12’s second grading game was away to St Paul’s on Sunday afternoon. The Holywood club were too strong for a ‘Fin team that gave their best effort on the day. It finished St Paul’s 2-13 Aughlisnafin 0-7. Conall King 0-5 and Rhys Clarke 0-2 getting the scores for the ‘Fin. East Down CCC will now draw up the three divisions and round 1 of the league will be Sunday 27 April.

The U-10.5’s had their first outing of the season on Saturday when they travelled to Dundrum for the Year 6 Go Games Blitz. They performed superbly well in their games against the hosts and Bredagh B. The next U10.5’s blitz will be hosted in Annsboro on Saturday 26 April.

The U-8.5’s Go Games blitz will be hosted by Loughinisland also on Saturday 26 April with six teams in attendance on the day.

The Seniors are at home to Mitchels this Saturday at 4 pm.