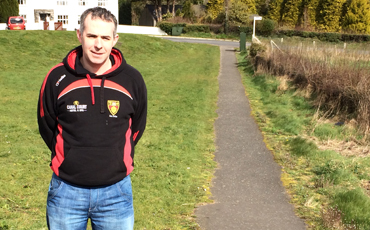 Councillor Pol O Gribín in Drumaness has called for a pathway improvement to increase safety.[/caption] Sinn Féin Councillor Pól Ó Gribín has written to Roads Service to request that a popular footpath in Drumaness is extended to ensure pedestrian safety.

Cllr Ó Gribín said: “Given the large number of residents who regularly use this path as a popular walking route around the village I believe that the footpath should be extended to allow pedestrians’ the greatest amount of security from oncoming traffic.

“Moreover, following the erection of the new bus shelter on the Newcastle Road we are seeing a greater number of school children and elderly residents walking out to use the passing public transport, it is imperative that their safety can be maximised as soon as possible.”

“I’ve now written to Roads Service to request they explore ways in which this footpath can be extended from Corry’s Corner to the lower entrance of the village at Shanvally Way.”

McGrath To Meet With New Walking And Cycling Champion