DOE Minister Alex Attwood has welcomed the 2012 road deaths figures which were the lowest in 80 years.[/caption] The figures released by the PSNI are the lowest ever on record. Last year in 2011, 59 people died. Up until 2010, when 55 people lost their lives on the road, the number of road deaths had never dropped below 100. Alex Attwood said: “2012 has been an important milestone for road safety in Northern Ireland, but there are still 48 families who have lost a family member over the last 52 weeks. I extend sympathy to those families and friends who lost loved ones through road tragedy. In a week that has seen the death of a toddler in Dundonald; I know how painful the loss of each person will have been over the last year. “This is the lowest death toll on record. The main causes of collisions continue to be speeding, drink driving and driver, rider and pedestrian carelessness. Many more men than women are killed. Child fatalities have increased in 2012. “The figure confirms that road users are taking responsibility and lives have been saved as a result. This factor, the work of doctors and emergency services, better roads, stronger campaigns all make contributions to today’s news.” Welcoming the good news, South Down MLA Chris Hazzard said: “It is great news that deaths on the road are down and I sincerely hope this figure stays down. Local rural roads in County Down do need to be better maintained and improved to make driving safe and Roads Service must keep an eye on this over the next months and years. [caption id="attachment_35281" align="alignright" width="200"] 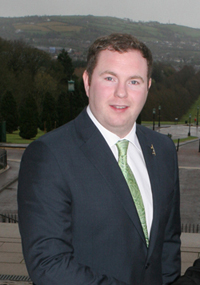 South Down MLA Chris Hazzard has welcomed the huge drop in road deaths in Northern Ireland.[/caption] “Resources need to be spent urgently to deal with the current situation. Roads in South Down are poor and we still do not have a motorway to absorb traffic off carriageways. We will still have to work harder to this figure down further and we must not be complacent. It is still a death a week almost and that is still too many. The only acceptable road statistic we can except is one with no road deaths.” Mr Attwood added: “The next horizon is moving towards a vision of zero fatalities. This is some time off – but if we can move from hundreds to dozens of deaths a year, can we not move further? A zero ambition would require radical and bold action to deal with those issues and would include measures that I am already working towards – a new drink drive regime, a new driver training, testing and post-test regime, all Ireland recognition of penalty points are examples.” The Department will continue working in partnership with the DRD’s Roads Service, the PSNI, the Northern Ireland Fire and Rescue Service, Ambulance Service amongst others, delivering a programme of road safety education, engineering and enforcement initiatives. Mr Attwood added: “I continue to urge road users to pay attention, expect the unexpected, slow down, always wear your seatbelt and never ever drink or take drugs and drive. By doing so – here and across the island – lives are saved.” Speaking about the figures, Head of Operations Branch, Superintendent Mark Purdon said: “One death is one too many and road safety remains and will remain a priority for the police throughout 2013. “Although we saw a decrease in the number of road deaths in 2012 to the lowest level ever recorded in Northern Ireland, we can take little comfort in the fact that 48 people lost their lives on our roads. “The pain of these avoidable deaths has touched family, friends and communities right across Northern Ireland and beyond. Each one of these victims represents a tragic loss for individual families and friends. We will be working hard to save more lives on our roads and prevent serious injuries. We are all responsible for road safety and today I am asking all drivers, passengers and pedestrians to help save lives in 2013.”

In 1931 there were 114 road deaths and this number increased over the years before peaking in 1972 with 372 deaths. The number of road deaths then gradually reduced during the late 1970’s and the 1980’s before levelling off with around 150 deaths per year during the 1990’s. Road deaths then decreased during the 2000’s dropping from 148 fatalities in 2001 to 115 in 2009 before the numbers virtually halved in 2010 (55 fatalities) with similar numbers recorded in 2011 (59 fatalities). This latest figure of 48 deaths in 2012 would indicate that the annual level of road deaths continues to decrease.