<![CDATA[ <p style="text-align: justify;">SOME of the biggest clay pigeon shooting prizes in Ireland will be on offer at the annual Irish Game Fair over Saturday and Sunday 29-30 June at Shane’s Castle… and, according to the organisers, even rank amateurs have a chance of pulling some of that prize pot, including an amazing shotgun worth £2,000! 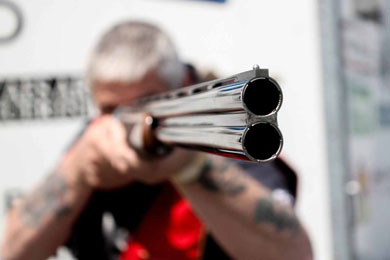 If you have a firearms certificate you could win a £2000 Caesar Guerini shotgun at the Irish Game Fair at Shane’s Castle.[/caption]

Well known Moygashel gun dealer Tommy Beattie, in association with the Anglo Italian Gun Company, have come up with a novel idea to make competition open to all comers. A top class clay shooter, Tommy is keen to spread the passion.  He said: “Clay pigeon shooting is a fantastic sport and genuinely addictive, but I know there are loads of people out there who haven’t yet had the chance to give it a go.

“We’ll be offering anyone who has a valid Firearms Certificate the chance to try their hand using one of the superb range of Caesar Guerini guns I will be displaying at the Shanes Castle Fair.  The competitors will be shooting under the supervision of one of the world’s leading talents – the British Trap Shooting Coach, Kevin Gill.  That’s an opportunity not to be missed and, an opportunity to try a fantastic range of guns, a chance to meet Kevin and a little bit of luck, even a rank amateur has a chance to win this fabulous prize!”

Albert Titterington, Show Director, said: “ We are very grateful to Tommy and his colleagues in the  Anglo Italian Arms Company (www.gueriniguns.co.uk)  not only for donating this fine prize and for sportingly helping us add to our clay shooting prize fund, but also for their ingenuity in devising this exciting competition which embraces the spirit of the Great Game Fairs.   Like all of us with a true passion for country sports, pursuits and lifestyles, Tommy is eager to make his sport accessible to all and this is a great way of doing just that.

“Anyone who is an FAC holder can choose a Caesar Guerini gun to shoot at the Pool Trap and they’ll not only get the chance to try out one of these superb guns and a chance to win super Pool Trap prizes but, even if they miss all 10 clays, they’ll still go into a draw for £2,000 gun sponsored by Tommy Beattie .   The entry to the Pool Trap   costs £2, the donation going to shoot organisers, Ballydugan Clay Pigeon Club.”

The Pool Trap at the Irish Game Fair and Fine Food Festival is traditionally one of the most popular have-a-go attractions, with around 600 shooters over the two days – so anyone who wants to take part in the 2013 event is advised to register early at the Pool Trap.

This year top shoots in the 30 Bird Game Fair Sporting Championships, the Flush and the Pool Trap will be competing not only for the honours and the bragging rights but also for a dazzling array of prizes including two guns sponsored by Donal Mc Cloy Guns Unlimited, quality watches, country clothing and cash.

The Irish Game Fair and Fine Food Festival is one of the two Great Game Fairs of Ireland and takes place at Shane’s Castle, Antrim, on Saturday and  Sunday 29-30 June.