Councillor McCarthy, a member of the SDLP Party, was co-opted to Council in 2009 and is serving her first term as Chairman of Council.  She succeeds Councillor Mickey Coogan as Down District’s First Citizen. 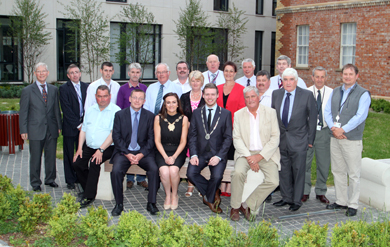 Down District Council councillors pictured at their annual general meeting in the Downshire Civic Centre.[/caption]

Speaking after receiving the chain of office,  Councillor McCarthy said: “I am privileged to be nominated by my party as Chairman of Down District Council. This is the district in which I was born, grew up, work and live in and love. I am proud of our district and proud to be the First Citizen. I give a commitment to and look forward to, representing the entire community, and to be inclusive of the various groups and bodies from around our area in the year ahead.

“I am particularly honoured that I will be the youngest ever Chairman of Down District Council and the first female Chair in seven years. This is an indication of the SDLP’s commitment to representing all ages and genders across the community.”

Speaking about the year ahead, Councillor McCarthy said: “This is an extremely important year to chair the Council with the Review of Public Administration taking effect, an election proposed for next year and crucially during a difficult economic climate for our people.

“It will be my aspiration to ensure the work of the Council is carried out in an efficient business manner. I will be working with my colleagues, and look forward to their co-operation to ensure the highest standard of public service balanced with the best value for money with local rates.

“The Down District area has incredible tourism potential from the shores of Strangford Lough to St Patrick’s Country to the grandeur of the Mourne Mountains.  The Council already have considerable tourism initiatives and in my year ahead I want to boost the image and profile of our district as a place to holiday and do business.  Tourism is our sleeping giant, and I intend to maximize  it’s full potential. 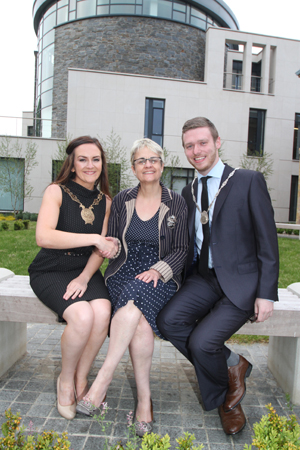 “I am determined to make my year as Chairperson a fruitful one, I will be working hard to represent everyone, as a figurehead, in particular I also look forward to working with young people, voluntary and sporting groups, delivering on major projects and ideas.”

In paying tribute to Councillor Coogan, the outgoing chairman, and Councillor McCarthy acknowledged his “successful year” and praised him for “working tirelessly for the district”.

SDLP Councillor, Gareth Sharvin, who was elected Vice-Chairman, will support Councillor McCarthy in carrying out the official engagements and duties during her term in office.

Councillor Sharvin said: “It is a great honour to be nominated and selected to be your Vice-Chairman for the people of Down District.

“It has been a rollercoaster of 16 months from when I took the council seat. I have progressed from being a grassroot member to a councillor to the Vice-Chairman of Recreation and Community Services and now to the Vice-Chairman of Down District Council tonight. I would like to thank so many for helping me to get where I am today, especially Eddie McGrady, former MP, and the late Peter Craig, for providing their guidance and giving me many wise words.

“My year as Vice-Chairman will aim to deliver for the youth, the elderly, for the families across our district and our local businesses. I want to see more for the youth in our district. To deliver a scheme of events throughout the year which will offer our youth a community spirit and the essential skills they need in today’s society.

“I also want to see more community festivals and ensure our play parks are to a standard for all the family. I want to promote and encourage more activities for the elderly in our community, to provide them an environment they call their own and get involved. And for our local businesses, I want to provide a dialogue of working together and deliver on promoting local trade, to help businesses through this difficult time.”

The outgoing chairperson Councillor Mickey Coogan expressed his gratitude to the Vice Chairman and his colleagues for the support they had given him during his term in office. He also thanked the Chief Executive and Council officers for their guidance and professionalism throughout the year in delivering the Council’s services.

Councillor Coogan said: “When I took over as chairman a year ago I really did not know what lay ahead of me. It has ben a tremendous year, a real rollercoaster. I have always worked for the interests of Down District at heart and there were good and not so good times throughout the year. For example, the flooding in Newcastle saw the Council put its emergency plans into effect and I was involved in executing these and helped clear roads and footpaths.

“So many things were happening throughout the year involving community and voluntary groups and in schools. I was delighted to host several school council meetings in our chamber in the Downshire Civic Centre where our new offices were officially opened.

“Toursim has also been a major activity throughout the area  from the Festival of Flight, St Patrick’s festival, events at Castleward and Hallowtides to name but a few. We must continue to promote our area in the future. Soon the mountain bike trails will be officially opened in the Mournes, and we have other programmes such as the Ballynahinch Streetscape to look forward to in our urban renewal.

“I was well supported by Vice Chair Maria McCarthy who never let me down. I expect her to do an excellent job this year and look forward to continue working with her as a councillor.”

Councillor Eamonn O’Neill (SDLP): “This will be a very busy year for the Chair and Vice Chair and they will have a full time job on their hands. It just seems to get busier each year. This past year has in particular been a hectic year for the outgoing chairman.”

Councillor Terry Andrews (Independent): “Outgoing Chair Councillor Mickey Coogan  had a unique style as a councillor and spoke out on a raft of issues. I was delighted to see his work with young people in the chamber. He certainly opened doors for Down District Council”.

Councillor Patrick Clarke (Alliance): “Councillor Coogan was throughout his year as Chair courteous, helpful and fair. He had his own style and did his best for Council and the District.”

Councillor William Dick (DUP): “Councillor Coogan did his best for Down District and we would like to pay tribute to him. He represented our council well and gave his best.”

Councillor Eamonn Mac Con Midhe (Sinn Féin): “It is a tough job chairing meetings and I must say that we have been treated fairly. It was a hard fight for our party to get the chair after years of struggle and it was a disappointment that Councillor Coogan left our party after a couple of months.”

Councillor Cadogan Enright (Independent): “In his year of office I found Councillor Coogan approachable, sympathetic, and hardworking, and look forward to continue working with his in the year to come.”

Councillor Robert Burgess (UUP): “Councillor Coogan treated everyone fairly  – it was a difficult year in the chair. He certainly broke the record too by leaving his party in office.”

Councillor Maria McCarthy (SDLP): “As your Vice chair last year, I know you worked tirelessly in your office as chairman and were always very approachable. I wish you well for the future.”