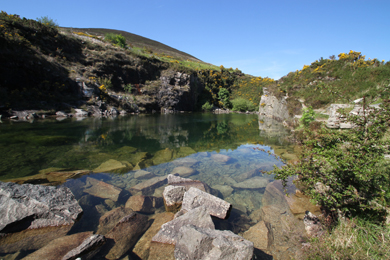 The scene at Paul’s Lake near Annalong at the side of the Mournes where two people tragically drowned last Saturday evening.[/caption]

TRAGEDY struck near Annalong on Saturday 1 June when two people drowned in a disused quarry close to the quiet County Down seaside town.

Police have confirmed that the two people who died as a result of a drowning incident were fifteen year old teenager Kevin O’Hare, and Colin Polland aged 39.

It is understood a group of boys were out swimming enjoying the good weather at the quarry at Grassdrumman Road, Annalong, at about 6pm on Saturday evening.

Kevin got into difficulties when he jumped into the cold water and the boys ran for help. Soon after Mr Polland and his wife arrived on the scene and he made a rescue bid as he swam out to save Kevin in the water.

Kevin O’Hare was from County Down. Mr Polland was originally from the area, but it is understood he had returned on holidays after living in England.

Emergency crews, including police divers, were involved in an evening-long operation to recover the bodies from the former granite quarry that is close to Spence mountain, between Newcastle and Annalong. Paul’s Quarry, where the incident occurred, is popular with young people who swim there  on hot days in the summer months.

An investigation is under way and post-mortem examinations are due to be carried out later on Sunday.

South Down SDLP MLA Seán Rogers has spoken out following the two bodies being recovered from the quarry in Annalong. Mr Rogers said: “This is an absolute tragedy and my thoughts are with the families of both of the deceased  at this awful time.”

Newcastle Councillor Carmel O’Boyle (SDLP) added: “Like everyone, I was shocked to hear of this terrible drowning accident. I understand that Kevin O’Hare was a pupil at the school in which I taught for many years. This tragedy will be so difficult for his young friends to come to terms with, but I know they will receive enormous support from their teachers and the whole school community.

“Colin Polland who gave his life trying to save Kevin was a hero. This is so very sad for their families and for everyone living in the locality.”

Councillor Eamonn ONeill (SDLP) said: “As a former Vice-Principal of St Malachy’s High School, Castlewellan, I am shocked and saddened to have heard of the deaths of a pupil Kevin O’Hare and also of Colin Polland in the tragedy at the quarry in Annalong.  My thoughts are with the families and friends of them both, as well as the wider school community of St Malachy’s High.”

Sinn Féin Newcastle Councillor Willie Clarke said he was shocked by news of the accident which struck near Annalong on Saturday 1st June when two people drowned in a disused quarry close to Spence’s mountain in Glassdrumman He said: “My sympathy goes out to both families of Colin Poland and Kevin O’Hare. My thoughts and the rest of the community are very much with the wider family circle of the two victims. “It is my understanding that Kevin got into difficulties in the cold water and the boys that were with him ran for help. Shortly after Mr.Poland arrived on the scene and without thought of his own safety tried to rescue the young boy; it is truly heroic to risk your own safety to help another human being who is in danger; unfortunately Colin made the ultimate sacrifice.” Sinn Féin Councillor Pól OGribin, who knows the O’Hare family, said the community was in a state of shock. He added: “The whole community of South Down is completely stunned by this tragic incident, and my thoughts and prayers go out to the families at this sad time. “The O’Hare and Poland families are both very well held in the area and I know that the community will come together to support them at this difficult time. “This incident needs to be a reminder about the need for safety measures to be put in place in areas such as this.”
South Down Alliance spokesperson Councillor Patrick Clarke has expressed his sadness following the deaths. Police divers, the Fire and Rescue Service and the coastguard were involved in efforts to save the two men. The quarry is close to Spence mountain, between Newcastle and Annalong.
“There will be a deep sense of loss and shock to the local families and relatives and indeed the entire local community of the two men who lost their lives. This is an awful tragedy and my heartfelt sympathies go out to the families of Kevin O’Hare and Colin Polland.”
]]>