<![CDATA[ <p style="text-align: justify;">Strangford MP Jim Shannon has called for local farmers to join together with the Ulster Farmers Union and BASC to control the scourge of Grey Squirrels in Northern Ireland. 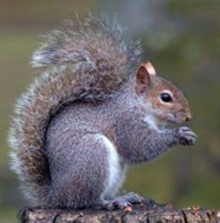 The grey squirrel invasive species in having a major impact on the native red squirrel.[/caption]

He said: “The grey squirrels directly impact upon the indigenous Red Squirrel and carry a pox that transfer from Grey to Red Squirrels and it is a priority that the farming community enable a strict control and culling regime to be commenced.

“In the Ards Borough there are some red Squirrel projects operating – namely at Lord Dunleath’s in Ballywalter  and at Mountstewart estate, and they have had some success.

“However these success stories can only continue if Grey Squirrels are controlled elsewhere and that is why other farmers and other land owners  – namely DOE and National Trust – must be a part of the control regime.

“To this end I have written to DOE Minister Mark H Durkan asking for his urgent attention to this matter. BASC and UFU have joined forces to assist and I would urge all landowners to be a part of this scheme to control Grey Squirrels,” added Mr Shannon.