<![CDATA[ <p style="text-align: justify;">Up to thirty young people from the Ballymote area attended the first night of the Friday Night Activity Hub in the Downpatrick Sports and Wellbeing Centre.

The initiative was organised by the Newry Mourne and Down Policing and Community Safety Partnership (PCSP) in conjunction with the Flying Horse Forum and County Down Rural Community Network as part of an on-going Action Plan to help reduce the level of anti-social behaviour within the area. 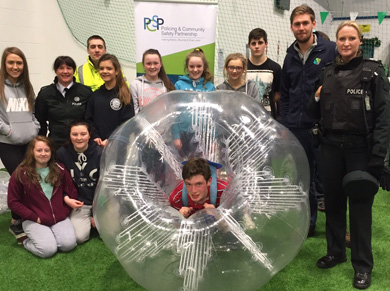 The free initiative is aimed at young people aged between 12-17 years and will run every Friday night from 9.15pm -11pm on a pilot basis until the end of January (with the exception of Christmas week). The first week saw the young people taking part in a night of bubble football and had the opportunity to compete against some of the local Neighbourhood Policing Team.

This week the girls will have the opportunity to get some beauty tips in time for Christmas. Other activities will include football, Gaelic and DJ Sessions. If these activities don’t appeal to all the young people they can drop in and have a game of pool, listen to music or play the Xbox.

The Friday Night Hub complements the existing programmes available to the young people in the Ballymote area. The Ballymote Sports and Wellbeing Centre hosts St Colmcille’s Youth Club on a Monday and Wednesday night. It also encompasses the SEELB’s Youth Forum on a Tuesday night followed by their Young Men’s Club and on Friday Night they have a Young Women’s Club.

Councillor Mickey Larkin, Chair of PCSP said: “This is a great initiative for the young people within the Ballymote Community. Rather than hanging around the streets on Friday Nights they now have somewhere safe to go and have fun at the same time. It is encouraging to see the Community and Statutory Bodies working in partnership to provide all these activities for the young.”

Constable Phil Quinn said: ‘This has been a valuable opportunity for the PSNI to showcase the broad range of general policing duties that officers in the Down area use to engage with the public. In one evening you can be playing bubble football in a sports arena in Downpatrick but later be stopping tractors driving through a village centre in the middle of the night.

“Although there weren’t too many requests for assistance on the night, we still had plenty of chances to get to meet those vital members of the community that provide a valued service, often on a volunteer basis. It also gives us the chance to dispel some of the myths around Policing and how we conduct ourselves on a day-to-day basis.

“I certainly look forward to repeating the event during a daytime operation to see how we tackle other aspects of crime detection and prevention.”

Under the Action Plan, PCSP Officers accompanied by the Crime Prevention Unit and the PSNI visited the Supervalu Shopping Centre on Tuesday offering advice on Keeping Safe over the Christmas Period. It is proposed to hold an evening in the Ballymote Centre where residents can come along and receive further information on initiatives that can be implemented to help reduce the fear of crime and how to protect their homes.

For further information on any of the programmes under the Ballymote Action Plan please contact the local PCSP Office on 028 4461 0840.