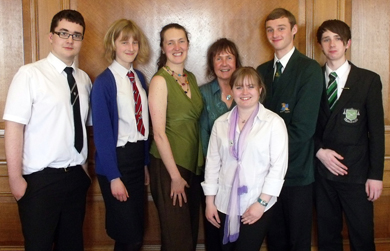 RSPB Northern Ireland has extended its congratulations to a former Down High School pupil who recently received the Tidy NI Coastal Care Award for Young Environmentalist of the Year.

Matthew Ferguson, who is now studying Marine Biology at a university in England, was nominated for the prestigious Award following his involvement in the Northern Ireland Marine Taskforce (NIMTF) Marine Bill campaign.

As part of the new RSPB Youth Advocacy Group, Matthew contributed at the highest level to this important piece of marine legislation.

Together the group formed a written submission to the Environment Committee on the draft Bill, with Matthew carrying out extensive research on the economic benefits for marine-based leisure and tourism within ‘Marine Conservation Zones’ in the UK and New Zealand. He also drew on his personal experiences diving in Strangford Lough to make recommendations for Northern Ireland.

On the basis of this excellent joint submission, the group were invited along with other marine stakeholders to give an oral presentation to the Environment Committee at Stormont.

However, as the Marine Bill edged towards the final stages, the group still had grave concerns about the Bill and requested a private meeting with the then Environment Minister Alex Attwood. Matthew took the lead at this meeting, demonstrating both his knowledge and passion for the marine environment . This resulted in a personal invitation from the Minister for Matthew to attend the first stakeholder meeting of the newly-formed Marine Division.

Back at school Matthew gave presentations at assemblies to over 1,000 pupils outlining his concerns and hopes for the new Marine Bill and he secured a fantastic 700 signatures for an NIMTF e-petition in just one day!

Last month the Bill finally received Royal Assent, making it the Northern Ireland Marine Act. It is Northern Ireland’s primary contribution to the EU goal of having healthy seas by the year 2020 and will allow the creation of protection areas called Marine Conservation Zones (MCZs) – the first of which will be Strangford Lough.

Commenting on Matthew’s involvement in the long-running campaign, Karen Sheil from RSPB NI said: “It was a pleasure for us to watch Matthew grow in confidence and find an independent voice and we wish him every success in his chosen area of study.

“The young advocacy group has reformed this autumn with some new members and they are doing some wonderful work to help support our current Rural Development campaign.

“We are working hard to save nature for future generations so it’s vital that young people are inspired to play their part and supported to have their voices heard at the highest levels of government.”