<![CDATA[ <p style="text-align: justify;">Down District Councillor Billy Walker from Rowalllene area has asked people across the district to back Killyleagh teenager James Savage in his bid to be elected to the UK Youth Parliament. Voting closes on Friday 27 February. 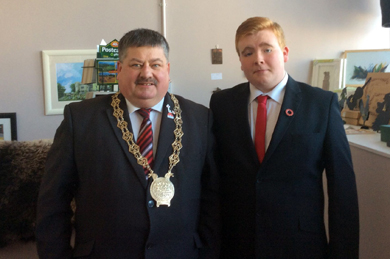 James Savage is a fifth year pupil at Blackwater Integrated College in Downpatrick an has shown a strong interest in politics. Councillor Walker explained: “James spent a week with me as Council Chairman attending meetings and my general business and received a great insight into local government. He is a very capable young man and a credit to his community.

“James was one of those youngsters in Killyleagh who were at a loose end and when we got the youth club up and running at the Bridge Centre, he soon got involved and is now even helping to attract other young people to the youth club and is organising activities.

“I am quite taken back by James working in his community in this way. He is a great example for the young people of the district. He is certainly inspired by a possible career in politics and it is encouraging to see such teenagers emerge as citizens of the future.

“Soon I will be presenting my Council Chairman youth awards and that has been very heavily subscribed with many great entries and I look forward to presenting the final awards to these young people. We must invest in the youth of today as they are our future.

“So please give James Savage your vote. He is a very deserving candidate.”

VOTE FOR JAMES AT: 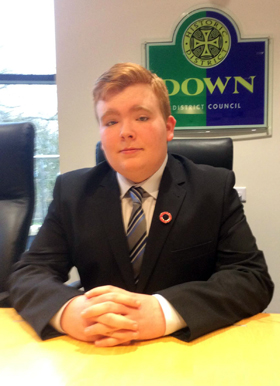 James Savage sitting in the hot seat in the Mourne Room at Down District Council during his recent work experience with the Council Chairman, Cllr Billy Walker.[/caption]

The UK Youth Parliament (UKYP) provides opportunities for young people aged 11 to 18 to use their voice in creative ways to bring about social change. Decision-makers across the UK use UKYP as a mechanism to seek the views of young people.

NIYF coordinates the UKYP in Northern Ireland, looking after the allocation of 18 Members of the Youth Parliament (MYP’s).

James Savage said: “I am really grateful to the staff and pupils at Blackwater Intergrated College for their great support. They have been absolutely fantastic.

“I had a great week on my work experience with Down District Council Chairman Cllr Billy Walker who explained a lot about local government to me. He was very helpful and has encouraged me on to become involved in politics in the future.

“I will have to finish my GCSE’s and further education first but I am certainly interested in community issues and current affairs. A career in politics is something I may certainly consider.

“Every week I attend the youth club in the Bridge Centre in Killyleagh and I can see first hand the good work that it is doing in helping the local youth. I’ve even been involved in organising activities and I really enjoy this sort of work.

“The UKYP is very exciting initiative and I hope I do well and get elected. It would be fantastic to represent local young people on this forum. So please vote for me and I will do my best in the UK Youth Parliament.”

Who can stand for the UKYP?

Any young person aged 11-18 can stand to be an MYP. An MYP must stand down on their 19th birthday. Persons aged 19 and over will not be able to attend national events such as the Annual Sitting and the House of Commons. You must live, work for a minimum of 14 hours, or be in education in the constituency in which you wish to stand for election. You cannot stand in more than one constituency in the same year’s election.

What will I be expected to do?

The role of a Member of Youth Parliament is to:

*  support youth voice and actively engage with every young person in their constituency; *  promote the positive work of UKYP. *  create UKYP policy and campaigns; *  meet regularly with other youth councils and forums in their area; *  speak on behalf of their constituents; *  take the views of their constituents to BYC Conventions and report on local campaigns; *  ensure that the work of UKYP is not affiiated with any political party; *  carry out other tasks as relevant in their local authority and agree with their local authority worker. *  participate in meetings; *  take part in the UKYP national campaign consultation and support young people in their areas to take part too; *  take part in votes on national policy and campaigns priority; *  communicate to the media as appropriate and under BYC media guidelines; and *  take news of UKYP’s work back to their constituency. 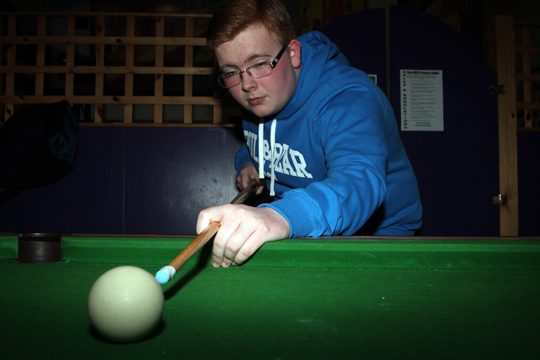 Cue-ing up for a career in politics… James Savage at the Bridge Centre in Killyleagh during a youth club night.[/caption]]]>