<![CDATA[ <p style="text-align: justify;">Visitors are flocking to Ards Arts Centre to view the new Matisse exhibition. Opened last week, ‘Matisse: Drawing with Scissors’ features 35 lithographic prints of the famous cut-outs by the French painter, sculptor and designer, spanning the period from 1950 up to 1954, the last four years of his life when he was confined to bed. 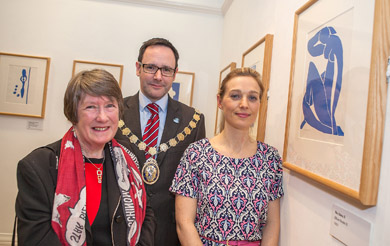 Pictured at the opening of the Matisse exhibition with Drawing with Scissors are (L-R): Betty Brown, artist, Mayor of Ards, Councillor Stephen McIlveen, and Arts Officer with Ards Borough Council, Emily Crawford.[/caption]

Henri Matisse (1869-1954) was one of the 20th century’s most influential artists and his works are renowned for their extraordinary richness and luminosity of colour. This Hayward Touring exhibition from the Southbank Centre, London, includes many of his iconic images, such as The Snail and the Blue Nudes, all taken from a special double issue of Verve, a review of art and literature, published by Tériade, a major publisher of fine art books in 1958.  Complementing the Georgian Gallery’s main exhibition is a contemporary take on Matisse’s signature style, with a display of work from members of the Arts Centre’s creative classes. These amateur artists, inspired by Matisse, have produced their own interpretations of his work in a vibrant and colourful exhibition of mixed media, from mosaics and paintings to textiles and pottery. The exhibitions are both on show in Ards Arts Centre until 24 April. Admission is free. For further information contact the Centre on 028 9181 0803.