<![CDATA[ <p style="text-align: justify;">UK Independence Party (UKIP) representative Alan Lewis has been going door to door in Clough and Seaforde with the Downe A&E petition collecting signatures and has commended the community across Down District for signing the petition. 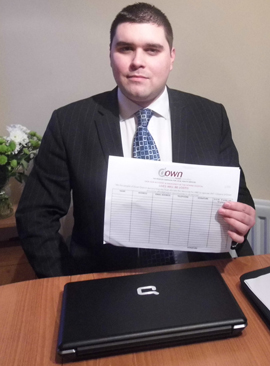 UKIP representative Alan Lewis was out doing the rounds collecting signatures for the Down A&E campaign.[/caption]

He said:  “I have visited Clough and Seaforde but there has been many politicians and community activists out across Down District also active collecting signatures. I commend each and every business that facilitated the signing on their premises.

I think the proposals for Emergency Department care  at the Downe Hospital should certainly not be superseded with a ‘lumps and bumps’ unit. Tgs would be completely unacceptable.

“I have been engaging with many local residents who have been telling me their own stories and experiences when it comes to local hospital care,  some of which I intend to follow up with official complaints. I believe proposals brought forward at Edwin Poots’ behest are entirely unacceptable.

“If implemented they would see what previously was a fully functioning Emergency Department replaced by what at best can be regarded as ‘lumps and bumps units on steroids’. The Minister must immediately reject these proposals as inadequate. He must now instruct the Trust to bring forward fresh proposals, which will lead to the reopening of a full service in the Emergency Departments at both Lagan Valley and The Downe Hospital.

“The latest proposals brought forward by the Trust fall far short of what is required. The performance of similar lumps and bumps units elsewhere in the province is unimpressive. There is no reason to believe these proposals if implemented at The Downe will be any different.

“These units will be unable to treat up to 50% of patients who previously used Emergency Department facilities at each hospital and they fail to address the fundamental crisis in the provision of Emergency Department care which has arisen during Minister Poots’ time in office.

“It is time the Minister manned up and put patients and frontline staff first, rather than dancing to the tune of bungling bureaucrats within the Department of Health and the Trusts who created this mess in the first instance.

“The closure of Downe A&E was said at the time to be temporary with the introduction of the ‘minor injuries unit’ it is clear the trust doesn’t intend to reintroduce the A&E any time soon,”  said Alan Lewis.