<![CDATA[ <p style="text-align: justify;">THE Down Coastal Rowing Club project took one major step closer this past weekend when members of the Troon rowing club brought their St Ayle’s skiff to County Down. 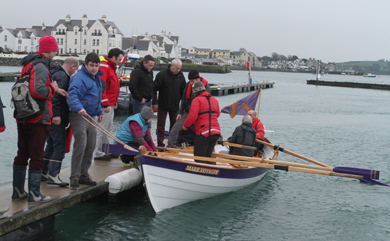 Crews change as the St Ayle’s skiff is tested out at Portaferry marina by local boating enthusiasts.[/caption]

On Friday afternoon, an eager band of enthusiasts awaited the arrival of the skiff in Portaferry. As the crew removed the boat cover, it was apparent that this was an excellent craft, one built from a self-build kit to a high standard and finish.

This was the first hands-on session for boating enthusiasts in the area for the St. Alye’s skiff and they were not disappointed.

Onlookers watched as it was carefully handled from its trailer and carried down the slip adjacent to the marina in Portaferry. A number of local crews of four persons with the cox from Troon took to Strangford Lough on a squally day hugging the shore to avoid the strong currents to test the skiff, and all were delighted with its performance.

Photos from the Troon skiff visit to Portaferry.

Following the rowing sessions accompanied by the RNLI lifeboat on exercise, everyone retired to the RNLI station for a briefing by Alec Jordan of Jordan Boats (www.jordanboats.co.uk) who is supplying the boat kits and  he gave a full explanation of the building process and the history of the skiffs. It is estimated that to build a skiff it takes 800 ‘man’ hours. 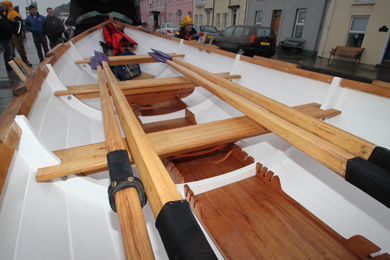 In pristine condition: an interior view of the St Ayle’s skiff that visited from Troon.[/caption]

On Saturday, however, the Ballywalter session was badly affected due to severe weather with only a few oars dipped and the Sunday session at Ardglass Marina too was curtailed as it was too rough to launch the skiff, but an information sesssion was held.

Following an initiative between the Strangford Lough and Lecale Partnership (SLLP) and the PSNI, the initial application was made to the Down Rural Area Partnership in 2013 and funding has been secured to build eight skiffs from self-build kits which will be distributed to participants across the area.

These kits are produced by Jordan Boats in Scotland and already there is huge interest in the rowing project in the Strangford Lough area and along the East Down Coast as far down as Newcastle. The growth in recreational St Ayle’s cutter rowing has taken off across the UK, Ireland and internationally with over sixty skiffs being built and many competing in competitions and participating in festivals.

When the project was first announced, an application from Ardglass too had been submitted in early 2014 seperately under the fishing village SEA grant initiative on behalf of a wide number of organisations in the village. This was done prior to the announcement of the formation of the Down Coastal Rowing Club from the SLLP/PSNI and subsequently the Down Coastal Rowing Club was formed and named. If funding is successful for the two Ardglass skiffs it is hoped that these additional skiffs too can participate in the coastal rowing and complement  rowing activities for the benefit of the community

(The Ardglass application still pending was made for two skiffs in order for these to be used during festivals in the village and events (sometimes competitively) for recreational use and fundraising, and for a healthy lifestyle activity, to encourage inter-group activity and co-operation. These skiffs will be built with using the skills and effort of local enthusiasts).

Check out a video on the Portferry rowing session: