Walney Offshore Wind farms is one of the world’s largest offshore wind farms located in the Irish Sea off the Cumbrian coast in North-West England supplying power to approximately 320,000 households. 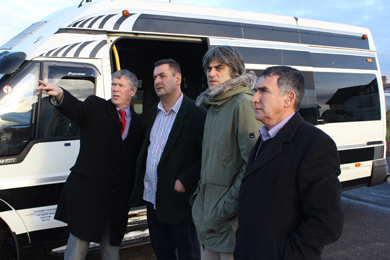 For the local fishermen and the councillors, this was an opportunity to express their views, ask questions and discuss the practicalities of fishing within an offshore wind farm. The First Flight Wind engineering and consenting team plus fisheries experts were on hand to answer any questions.

The fishermen were taken out to the offshore project to experience being on a vessel within the Walney offshore wind farm. Delegates also spent time at the operation and maintenance base for the Walney Offshore Wind farms, which is based in Barrow-in-Furness and employs approximately 70 people.

Jack Farnham of First Flight Wind attended the study trip and said: ‘This visit is only part of our ongoing engagement with the local fishing industry. We know concerns remain from the fishing industry about the First Flight Wind project and this study trip is part of our approach to understanding and addressing these concerns. We will continue to work with fishermen to try to resolve any issues that may arise as the offshore project develops.’

The local County Down councillors remained ashore taking a trip round Walney Island to view the wind farms from shore.  They met with Cumbria County councillor John Murphy and Furness Enterprise business development manager Stuart Klosinski who provided helpful insights into the impact of local wind farms on the economy and residents of the area.

Down District Councillor Willie Clarke speaking after  the visit said: “This was a very worthwhile trip and certainly opened my eyes up. We visited the green energy hub at Barrow-in-Furness and saw that it did create a number of green energy based jobs for the area. I certainly support the development of renewable energy and this has to be welcomed.

“However, local County Down fishermen have concerns about the impact the marine windfarm will have on their fishing opportunities through the year. Fishermen from Ardglass, Portavogie and Kilkeel are concerned at the loss of valuable prawn grounds. 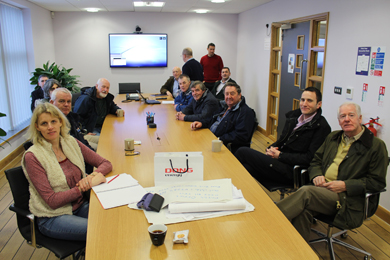 Getting ready for an exchange of information and views in Barrow.[/caption]

“I understand that DETI has identified the development zone and that cannot be changed but only one third of this zone will actually be used. It is a bone of contention with local fishermen that their grounds are not static in that prawns appear in various areas thropugh the year. These wind turbines may well be located on these key grounds. What we have to do basically is ensure that the fishing industry is sharing the right information with First Flight Wind so we can make the best infrmed decisions as to what the imacts on the fishing industry will likely be.

“We have to think ahead at the generations in the future who will be affeted by this decision. Given the strategic importance of the Irish Sea prawn fishery to the east Down economy can we afford to jeopardise it? Difficult questions have to be asked  – and answered. I would certainly like to know why this location was selected given its commercial fishing importance.”

Newry and Mourne Councillor Harold McKee (UUP) added: “On the first evening we had a fairly heated discussion on the wind farm issues and fishing involving Barrow fishermen. Even before cables come ashore – and this will represent issues for local farmers – fishermen have to consider how this will affect them.

“The County Down fishermen went out to see the wind farm first hand and they were impressed with the size of the turbines and the cruise-type ship used to service the technical staff. But they were concerned at tht distances between the turbines – they argued that 50 metres was too narrow a gap and this needed to be one kilometre for safety reasons. A lot of work will need to be done yet on the survey side of this issue. On this, while fishermen have to stay clear of the area and lift their fishing gear and pots while survey work is ongoing, there is the matter of compensation that needs to be discussed.

“One older Barrow fishermanm who is now acting as an adviser for DONG, said that it would be easier for the fishing industry to accept the windfarm and try and moderate the impacts on the fishing grounds. He advised that solutions would best be found through working closely with the windfarm developers.

“However, there are a huge amount of complex issues to consider. For example. when 40 vessels traditioanlly fish an area, and this area is then limited, how will this be mnanaged? We need a transparent consultation process with no hidden agendas.

“On reflection, looking at Barrow, I can say that jobs were created, some using the skills transferred from the submarine yards. There was quite a lot of unemployment there. And the Royal Hotel has now been refurbished and is busy looking after visiting workers.

“There will certainly be significant benefits with a windfarm off the east Down coast but there will also be huge issues facing the fishermen and ultimately farmers. A lot of work has to be done yet during this consultation,” added Cllr McKee.