Directed by Lisa May

“My duty as judge is to choose a mother for the child.  We will have a test.  Place the child in the circle…” 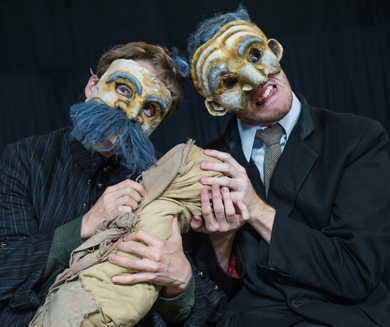 Don’t miss this classic play written by Bertolt Brecht showing in the Mac.[/caption]

The Caucasian Chalk Circle’ is a master-piece of twentieth century drama, powerfully demonstrating Bertolt Brecht’s pioneering theatrical techniques.  A servant girl sacrifices everything to protect a baby abandoned in the heat of war. Order restored, she is made to confront the boy’s mother in a legal contest over who deserves to keep him. The comical judge calls on an ancient tradition, ‘the chalk circle’. to resolve the dispute. Who wins?

Bruiser is delighted to be presenting this modern classic with a brand new musical score licensed by the Brecht Estate, composed by Matthew Reeve, who has previously worked with Bruiser on ‘Sweet Charity’, ‘Lady Windermere’s Fan’ and ‘The 25th Annual Putnam County Spelling Bee.

Matthew Reeve said: “The music for ‘Chalk Circle’ has been a real creative challenge.  The entire score will be sung and played by the actors themselves live on stage.  We wanted to create something both haunting and anthemic, reflecting the hard-hitting action of the play.  A lot of the music has been developed in rehearsals with the actors too.  We can’t wait for people to hear it.”

Gilly Campbell, Dance and Drama Officer, Arts Council of Northern Ireland added: “The Arts Council is pleased to support Bruiser Theatre Company with this excellent production of Brecht’s The Caucasian Chalk Circle.  With the play touring a number of towns and cities across Northern Ireland, I encourage everyone to go along and experience this renowned play which will take audiences on an emotional and moving journey.”