<![CDATA[ <p style="text-align: justify;">Alliance Party candidate for the South Down election Martyn Todd has posed a series of questions that voters may ask the other candidates as they canvass around the constituency to gather their votes. The South Down Westminster election may appear a one horse race with Margaret Ritchie at the front but there are important change staking p;lace in the the way people think about politics. 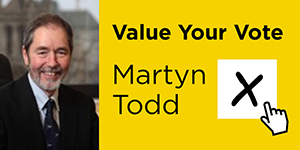 Irish playwright Oscar Wilde said: ‘There is no such thing as an indiscreet question’ and with just ten days left to the election, he may be right.

Martyn Todd, Alliance candidate, said: “We are entitled to ask questions . We are not entitled to the answer that we want to hear and not even necessarily entitled to any answer… but we can ask the questions.

“As a Westminster candidate in South Down, it is my role to answer questions in hustings events, something which I am very happy to do, being one of the prime movers behind the project. But I, too, have questions for the other candidates.”

To Chris Hazzard, Sinn Fein. “There is no doubt that Sinn Fein’s local network of constituency staff and volunteers is world class and second to none in Northern Ireland. People are very grateful to you and your colleagues for this work and remember you at election time.

“But voters should take into account that a vote for you is not just a “thank you” for a practical problem solved. It is also a vote for a set of principles and values, which are best captured in the name of your party, Sinn Fein – “we ourselves”. The fundamental message here is that there is an inside group and the rest are outsiders. In practice, the inside group are looked after, even when this is to the clear disadvantage of the rest of the population.

“The prime objective of your party is a united Ireland, but the reality is that Sinn Fein is failing on this. As time goes by opinion polls show that more and more people in NI, from both sides of the divide, are content with Northern Ireland remaining in the UK. All the work on the ground has gained you votes, but not changed hearts and minds.

“Before there can be a united Ireland the majority of people in the RoI will have to vote to take on the cantankerous and hugely expensive “Black North”. Until politics and life are properly normalised in Northern Ireland, most RoI voters will vote to distance themselves from the sectarian strife and huge costs of division that would come with a united Ireland.

“Why is such a bright, well educated, well read and personable young man like you getting involved in such a divisive project?”

To Harold McKee, UUP “Your responses to the questions posed at last week’s hustings were closely aligned with those of the DUP candidate. As the UUP continues to self-destruct, aided by the very foolish pact with the DUP, are you going to leave the UUP and join the DUP?”

To Henry Reilly, UKIP “You know how the EU works, that there are 28 countries currently within the EU and a further 4 countries that are not within the EU, but are in the European Free Trade Association (EFTA). The deal for these countries is that they must implement every EU directive that relates to trade, which is about 75% of all directives, including the ones on free movement of labour.

“So to stop immigration, the UK would have to be outside the EU and the EFTA. The consequences of this to UK trade with EU countries, according to all reputable trade organisations, would be disastrous.

“The region of the UK that would be worst affected by an exit from the EU is Northern Ireland, where 55% of our exports go to the RoI, which will stay in the EU. Border areas such as South Down will be worst hit.

“Why are you in UKIP, a party whose ambitions are damaging to South Down?”

To Margaret Ritchie, SDLP “You have been, as the Speaker of the House of Commons has rightly said, ‘indefatigable’ in your dedication and hard work for your constituents, of all backgrounds. You also have a clear vision of what the future tourism economy for South Down could be, focused around St Patrick, our rich heritage and beautiful landscapes.

“However, the party you joined 30 years ago is not the party it is today. It is no longer a progressive party of the centre ground. Its tacit support for the naming of a play park after a controversial figure of the troubles would never have happened 30 years ago. The views of your leader are more and more out of touch with younger voters. And your Minister for the Environment has done untold damage to the future visitor economy of South Down by cutting all funding to the excellent voluntary organisations that protect our heritage and landscape and help develop a sustainable visitor economy based on these precious assets.

When will your personal values, which have remained steadfast to the early SDLP values, make it necessary for you to leave the SDLP and go independent, as Sylvia Hermon has done?”

To Jim Wells, DUP “As we go through life, when new evidence conflicts with the beliefs that we formed as a young person, we have decisions to make about changing some parameters of those beliefs or continuing, in blind faith, by denying the new facts.

“It would be so much easier if the world consisted of simple black and white. But life is not like that. The world is complicated, muddy and ever changing. There is always an exception to every rule. We have to use judgement at all times, guided by our beliefs but openly accepting new evidence that has been proven to be reliable.

“Your party, Jim, is a political party that prides itself on being a very religious party. Most of your elected politicians are fundamentalist in their beliefs. This is their personal right. However, the huge majority of people in Northern Ireland, Ireland and the UK who are Christians do not believe as you believe. Their problem with your party is that you force your own moral views on Northern Ireland society at every possible opportunity. To paraphrase your former leader’s remarks that Dublin rule is Rome rule, most people now see that DUP rule is Free Presbyterian rule.

“Will your successor as Health Minister make a better job of respecting the Ministerial code and genuinely apply “equality of treatment?”

Martyn Todd ended by saying: “And my final question is for the voters of South Down. Would it not be better if we worked together – with each other and with outsiders – to make this a better society for everyone?”  ]]>