<![CDATA[ <p style="text-align: justify;">WHEN faced with the thought of leaving school many people feel that university is the only option. Others feel that they may not have the ability to get to university. It is often a confusing time for many young people as they make life-changing decisions and look down into the chasm of ‘youth unemployment’.

In recent years many have suggest that we live in a society where some schools have an elitist mindset and are less willing to help those who do not achieve as well as they should. Down News took to the streets of Downpatrick to see what local people said  about that critical time in life when education is a key milestone writes Aidan Fallon. 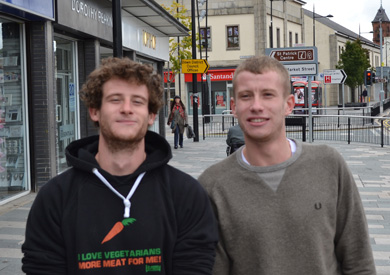 “We feel like they should have focussed more on vocational matters and life skills such as teaching people how to write a CV or even on dealing with issues of drugs and alcohol because they are both factors that face many young people today. Schools should also be educating young people in alternatives to university as universtiy fees are crazy”.

Mark went to SERC when he came out of school but says that the school never really influenced him in that decision and believed that there really wasn’t any other alternative, whereas Shea is in employment and believed that “If someone knows what they want to do and looks hard enough they can find a job”.

It seems that this view regarding fees in university was a common one amongst those surveyed and another person to share this view was current SERC  student Beth Teggart, who said: “Although I am not going to university this year I will be applying next year, the thought of paying triple the price for fees in universities in main land Britain is definitely something that would put me off applying across the water.”

CHECK OUT THE FACEBOOK LINK TO THE PHOTOS OF THE PARTICIPANTS (Photos by Kieran Cross).

When asked if she felt that attending SERC was the only alternative to university after coming out of school, she said: “SERC was really the only alternative. Obviously there are apprenticeships but I don’t  feel like they are for me. Coming out of school I felt like there was a lack of support for those who didn’t achieve as highly as they were predicted, so from that point of view I didn’t really feel like there were many more options”.

However, there are other opinions regarding the topic of university fees, as Matthew Kennedy says: “I feel the university fees are very high, however, in the long run I think they are worth it when and if you get a well paid job afterwards.

“I am confident of getting a job afterwards because of the fact that they are calling out for engineers, so jobs in the RAF or in the North Sea oil industry could even be possible after graduation”.

After this we interviewed mature student Marcus Blythe, who explained: “When I was in school I wasn’t pushed enough, and careers advisors advised me on going to college. It was a good decision when I look back on it but at the time I regretted it because the first course I did was joinery, and it didn’t work out. However, that made me start into an ICT course and I have been working in that field ever since”.

Nathan Rice and Daryl Hasley both said that their schools didn’t provide enough support for them because they weren’t the top achievers. Saying this, however, Daryl did indicate he wished he could go back to school to work harder and to get better grades. Both also said that university fees would put them off university as the amount of money to be paid would be far too much.

Assumption student Amy Madine said: “University is extremely expensive and I feel a person needs to have a job to help pay for the high fees”.

The short survey gives some insight into the mindset of young people in the local area regarding post-school endeavours. It shows that some feel we are in an elitist society to which schools are more inclined to help those who achieve higher and leave those who don’t do as well to fend for themselves. As well as this the rising price of university tuition fees is something that would deter people from attending university and bettering themselves for the world of work in the future. Vocational education is a strong alternative option to third level academic education.

There are also those who were underachievers at secondary level education who, for medical or health reasons, have suffered poor educations. They too need, like everyone, to adjust to the brave new world of education towards employment or education in a society struggling with a long recession and offering poor employment prospects.