<![CDATA[ <p style="text-align: justify;">THE site of the former Saintfield Police Station is now passed for a social housing development and work will begin in early 2014.

Rowallene area Down District Councillor Billy Walker (DUP), speaking at a full council meeting last night (Monday 23 September)  just after planning permission was approved, said that he has been working closely with Trinity Housing Association to ensure that the former Saintfield Police Station could eventually get this planning permission and provide homes for 24 people. 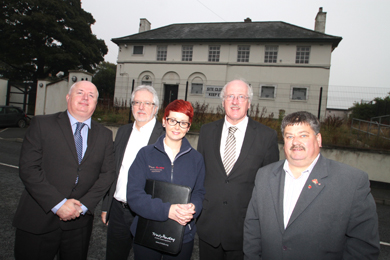 He said: “This will be a major boost to Saintfield housing. Saintfield got the green light at the planning item on the agenda. While some wanted to defer the decision again until further examination of the site was undertaken, I am happy that the site level will in fact be lowered by a metre which will prevent the new homes from being higher than neighbouring properties and looking down on to them which seems to have been an issue with some.

“The plans drawn up by Michael Whitley Architects met the criteria and now we can look forward to this project moving ahead.”

“These units of accommodation will be built to current Building Control Regulations, Life Time Homes and Secure by Design.  We aim to be onsite before 31 March 2014 with a construction period of 52 weeks and completion in March 2015.  Trinity Housing would like to thank Councillor William Walker for all his support and assistance to enable this Social Housing Scheme to be developed within Saintfield.”

Attending the site visit to the former Saintfield Police Station, Strangford MP JIm Shannon said: “This is very much needed accommodation in the Saintfield area. It is the biggest development we have seen in Saintfield in 40 years. These homes just can’t come quick enough.

“The Trinity Housing Association will be building 12 homes and this is certainly very much welcome for those currently on the housing waiting list. I am delighted to see such progress and look forward to the building programme starting.”

Rowallene Councillor Robert Burgess (UUP) also commented:  “I am delighted that this project has finally been approved. Saintfield will benefit from this addition to its housing stock. But even though the site level is being reducd by one metre, I still feel that it should have been levelled to blend in with the apartment block next door.”  ]]>