The first call was received at 6.07pm to help four people on board a small power boat which was experiencing engine problems near Church Point in the Strangford Narrows area of Strangford Lough County Down.

At the time, the weather was cloudy with good visibility, a calm sea and force two easterly winds. 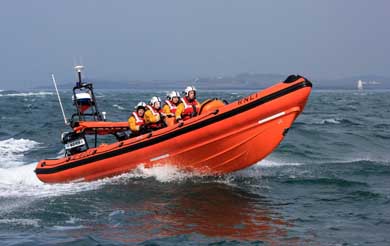 The volunteer crew launched at 6.13pm and were on scene with a man and a women and two children onboard the powerboat within three minutes.

By this stage the people onboard the power boat had managed to re-start their engine and made their way to the pontoons at Strangford.

Not long after, a second call was received at 8.40pm from the Coastguard requesting the RNLI to investigate a 10-metre yacht that appeared to have slipped its moorings and beached near the old Katherine Quay in Strangford County Down. Once again, the weather was cloudy with good visibility, a calm sea and force one easterly wind.

The volunteer crew launched at 8.45pm and were on scene two minutes later. They found two men on board and helped fix a line to secure the yacht so that it would not drift when the tide rose.

The third and final call of the evening was received 9.57pm from two men onboard a 10-metre yacht that was experiencing engine problems approximately 10 miles south east of The Strangford Bar at the mouth of Strangford Lough County Down. The two men had set out earlier that evening from Portaferry to travel to Peel Harbour in the Isle of Man.

The volunteer crew launched for the third time at 10.02pm and arrived on scene at 10.35pm.

Once the lifeboat crew had located the stricken vessel, they put a lifeboat crewmember on board the yacht and started to tow the vessel and its two man crew towards Peel Harbour in the Isle of Man.

The RNLI crew from Portaferry then rendezvoused with the crew of the larger all weather lifeboat from Peel RNLI who then took over the tow and took the yacht and its two man crew back to the safety of Peel Harbour.

The Portaferry crew departed the scene at 11.20pm and returned to station in Portaferry at 12.05am after what had been a very busy evening.

Commenting on the evenings events, Lennie Lawson, Deputy Launch Authority for Portaferry RNLI said:  ‘This has been a very busy evening for the volunteer crew and it is testament to their first class training and personal commitment that everyone this evening has been returned to shore safely. The RNLI relies on the commitment of such volunteers to provide this service saving lives at sea and it is a service we are all proud to be part of.”

But just when they thought things would calm down, another emergency call rang through.

A call was received at 4.50pm on Friday from the Coastguard requesting the volunteer RNLI crew from Portaferry go to the aid of six people, five in canoes and one in a small motor boat, who had got into difficulty just off Church Point in Strangford Lough. The RNLI volunteers launched the lifeboat at 4.50pm and arrived at the scene five minutes later.

They discovered that a small motor boat had gone to help five adults in two canoes, three men and two women, who were entering the Narrows area of Strangford Lough.

The RNLI crew took all six people onboard the lifeboat, secured the small motor boat and two canoes and brought all safely into Strangford Marina where they were put ashore.