<![CDATA[ <p style="text-align: justify;">The volunteer lifeboat crew at Portaferry RNLI were involved Saturday 17 May in the rescue of 23 canoeists who got into considerable difficulty just off Castle Island in Strangford Lough. 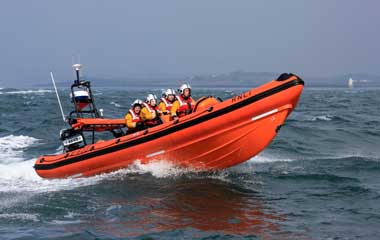 The Portaferry RNLI lifeboat were involved in a rescue involving 23 canoeists on Strangford Lough.[/caption]

The call for help was received at 2.40pm and the volunteer lifeboat crew launched at 2.45pm. They arrived at the scene just off Castle Island in Strangford Lough County Down at 2.55pm.

At the time, the weather was cloudy with good visibility, a slight sea swell and Force Four southerly wind making canoeing more difficult.

At the scene, the group of canoeists, which consisted of 23 men and women had  run into difficulty with the result that six of the party had ended up in the water. The RNLI crew recovered two of the people from the water while a small motor boat which had also come to the canoeists aid took the other four on board.

The RNLI lifeboat crew then took their two casualties along with two canoes back to nearby Strangford Lough Yacht Club where the casualties were put ashore into the care of the Coastguard.

The  lifeboat crew then returned to the scene near Castle Island and from there escorted the remaining 17 members of the canoe party back to the safety of Strangford Lough Yacht Club and the waiting HM Coastguard team.

Commenting on the rescue, Brian Bailie, Lifeboat Operations Manager for Portaferry RNLI, said: ‘Thankfully everyone was brought safely to shore and it is testament to the training and dedication of the volunteer RNLI crew that a potentially tragic situation was averted.

“Strangford Lough is an extremely popular location for groups of canoeists and it is vital that they take all necessary precautions when taking to the water.’

As the summer holiday period is just around the corner and many people are expected  to indulge in watersports around the coast, on lake sand rivers, it is advisable that all participants  check out the information on ‘safety at sea’ on the RNLI website at:

where there is a section dedicated to safety and education.