<![CDATA[ <p style="text-align: justify;" align="center">THE penultimate  meeting of the Age Sector Platforms Pensioners Parliament was held in the Great Hall  at the Downshire Estate in Downpatrick. 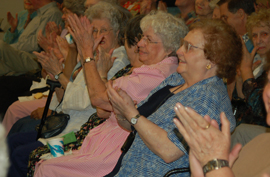 The Pensioners Parliament was run over the six Counties and a two-day parliament is to be held in Belfast to examine key issues.

In the Parliament’s to date, three sessions looked at  Making Ends Meet, Reforming Health and Social Care and Fear of Crime.

The members agreed at the meeting last Friday (19 April) to bring forward a number of motions to the two-day Pensioners Parliament meeting in Belfast at the end of May.

Hazzard Says He Was Delighted at Full Turnout to Pensioners’ Parliament

Sinn Féin MLA Chris Hazzard, who participated in a political panel discussion hosted by the Pensioners Parliament charity said that it was a excellent opportunity to engage with senior citizens from this area.

He added: “It was a great privilege to be able to engage with more senior members from the community today at the pensioners parliament event, and it was no surprise to see the Great Hall packed with local senior citizens and a wide variety of issues was discussed. As people in this area continue to enjoy longer lives, it is up to public representatives to build public services that are fit to meet the demands of this growing section of our community.

“Ongoing issues including healthcare, transport, community safety and fuel poverty are vitally important to all sections of our community, however, they are often most pressing for our senior citizens and it is important that we as public representatives continue to be robust defenders of their interests.” 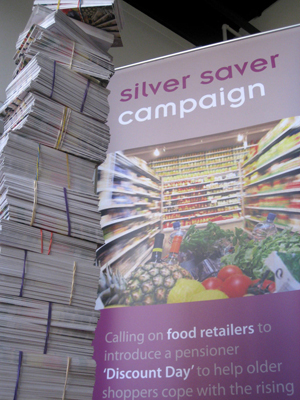 The Pensioners Parliament meeting in the Great Hall was attended by people from across Northern Ireland.[/caption]

Down District Council Chairperson Councillor Mickey Coogan opened the Age Sector Platforms Pensioners Parliament in the Great Hall of the Downshire Hospital and said: “ The two-day parliament in May will see delegates from each County coming together to discuss the key issues facing older people.

“A report on its findings will be distributed widely, and used as evidence to support older peoples issues at all levels of government from Council through to Stomont , Westminster and Europe. For my own part I feel it is crucial to obtain these views first hand as no amount of research or reports can truely reflect the wide range of concerns and needs of older people or the deficit in services which can vary across the north.

“ Over the past year I have met with a dedicated group of older people from the Newry and Down Seniors group and I have no doubt this group will grow in the years ahead. It allows me to become involved in the many campaigns they are supporting.

“I have worked with the organisers of today’s event – Age Sector Platform – to help promote one of their many campaigns and hope to secure the support of fellow Councillors for the Silver Saver Campaign which will call on local food retailers to introduce a pensioner Discount Day to help older customers cope with the rising cost of living and enable them to maintain a balanced and healthy diet.”

Councillor Coogan said that a motion on the Silver Sector Platform will go before Council in May and added that he expected Council to support the idea.

He added: “I feel Council must take a lead role in co-ordinating the campaign with local retailers. There is always a cost with these campaigns but again I feel the benefits to older people and indeed local food retailers will be significant and any cost must be measured against need and value to the District.”

DUP MLA Jim  Wells said: “It was a very interesting experience with searching questions asked by very forthright senior citizens. “I was quite impressed with how far pensioners had travelled to be at the conference. We faced questions from delegates from Bangor, Comber,the Ards Peninsula and Newry as well as Down District.

“The most contentious issue raised was private sector involvement in health care. Some delegates were totally against any private provision whilst others took a more pragmatic view.

“I have to say however that I was somewhat concerned that the delegates failed to acknowledge the achievements of the Assembly such as free public transport for pensioners, the cap on rates and the prevention of water charging. Whilst the Assembly is far from perfect and there is much to do some recognition should be given to the significant achievements which have occurred in difficult circumstances”.

Rogers Says It Was A Very Worthwhile Event

South Down SDLP MLA Seán Rogers attended Down’s Pensioner’s Parliament in the Civic Centre last week. Mr Rogers said: “I was delighted to be asked to appear on the platform at Down’s Pensioner’s Parliament. The event was organised by Age Sector Platform and it gave local pensioners the opportunity to question their elected representatives on the issues that matter the most to them.

“It was no surprise that the ‘Transforming Your Care’ policy was highly topical for those present.  The issue of Corporation Tax and on a more local basis the Ballynahinch Bypass were all raised by those who attended.

“This was an extremely worthwhile event and I look forward to more of these in the months ahead.”

“With the age profile of our population changing, with more people living and working longer, politicians must ensure that the relevant services are in place to meet this change.

“We must work to ensure that we deliver first class health services. However, we should also look to provide cultural and leisure activities.

“I thoroughly enjoyed this event, and I wish those who took part and organized this event every success in the future.”

Grants Available For Tourist Events In Ards And North Down