<![CDATA[ <p style="text-align: justify;">NI Fisheries Minister Michelle O’Neill has voiced her anger after the British Ministry of Defence (MoD) admitted one of its submarines had been responsible for dragging a local fishing trawler backwards through the Irish Sea. 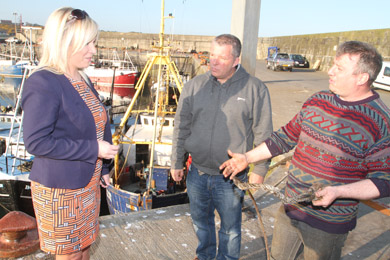 incident happened 16 miles off the County Down coast on 15 April this year when the Ardglass-based prawn trawler Karen B317 was violently dragged backwards before the crew were able to release the nets. At the time, the British MoD denied having any of its submarines within 150 miles of the incident.

Minister O’Neill said: “I am appalled and astonished at the actions of the MoD. Firstly, a British Royal Navy submarine put trawlermen’s lives at risk when it snagged the nets of the Karen Band then dragged it and its four-man crew through the water. Safety at sea is paramount for the fishing industry and our fishermen should never be exposed to the type of danger faced by the crew of the Karen. I wrote to the British Secretary of State insisting this matter was raised with the MoD and that an investigation was carried out.

“Secondly, why does it take the MoD almost five months to come clean and admit what it has done? In the days after the incident, I visited Ardglass to meet with the owner Simon Wills and I heard first hand from Skipper Paul Murphy of the frightening moment he and his crew feared for their lives. I also saw for myself the damage to the boat and the profound impact the incident had on those affected.

“At the time when I raised the issue with the British government and demanded clarity, we were told the Royal Navy had a robust protocol which prevented contact between submarines and fishing vessels. We were told there was no allied submarine within 150 miles of the incident. We were led to believe this was an unsanctioned action by an unidentified nation.”

The Minister went on to say: “It is inexcusable to put lives at risk in this fashion and not to admit responsibility immediately afterwards. There are clear guidelines that must be followed at all times. However, in the case of the Karen, those guidelines have been flouted.

“I am calling on the MoD to identify the individuals responsible for this incident and the evasiveness which followed, to explain why denials were issued, and to give an assurance to the fishing industry on what steps will be taken to ensure that this type of incident never happens again.”