The school has installed a new Home Economics suite and refurbished its science and technology laboratories with more than £900,000 of funding from the Department of Education’s minor works scheme. 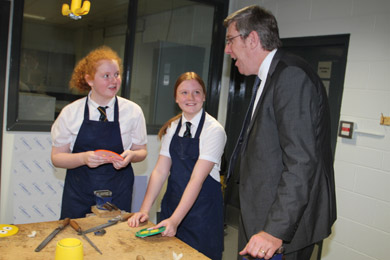 Speaking at the school today (Wednesday 16 October), the Minister said: “I am honoured and pleased to have the opportunity to officially open these excellent new and upgraded facilities for science, technology and home economics at Shimna Integrated College.

“It is so important now for children and young people to have a sound grounding in the STEM subjects – Science, Technology, Engineering and Maths – so that they can maximise their capability and employability in the modern world.

“Similarly, home economics is a subject area that offers not only essential knowledge and skills for later life, but also diverse and attractive employment and training opportunities should any young person wish to pursue a career in the world of food. As a former chef myself, I can attest to the value of my home economics learning at school!”

The Minister added: “Schools right across the north benefit from improvements carried out under my Department’s minor works scheme, with more than £31.5million invested so far this calendar year and more to come. 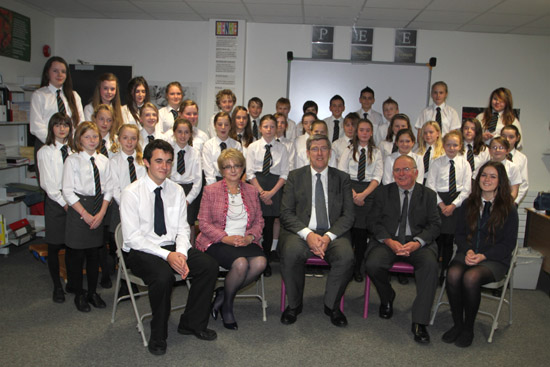 “We are operating in tough financial climate but I am committed to maximising the resources available for capital works projects like those completed at Shimna, as well as for maintenance and major capital build schemes.”

“I commend the Principal, Governors and all the staff at Shimna Integrated College on their effective management of the disruption during the building work, and wish all the pupils, present and future, the very best as they get involved in STEM and home economics through the new facilities.”

Students, staff and governors at Shimna Integrated College were delighted to welcome Minister of Education, John O’Dowd to open the new Forbes Building.  Chair of Governors, Jennifer Temple, expressed heart-felt thanks for the funding from the Department of Education for the much needed additional accommodation and facilities which include home economics kitchens for the first time at Shimna.

During a tour of the college, Minister John O’Dowd was also able to see the refurbishment of all of Shimna’s science laboratories, also funded by the Department of Education.  And also at the official opening event was David Thompson, representing the Integrated Education Fund, which supplemented the DE funding to allow the fitting out of the basement area of the Forbes building to create a new media suite. 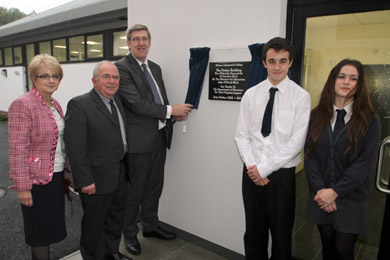 Shimna Principal Kevin Lambe, “said: “Shimna was founded by parents, and the original building  was created by those parents with a bank loan underwritten by the Integrated Education Fund (IEF).  The opening of this building today brings together the efforts of those founding parents, the support of the IEF and the support of the Department of Education.

“The building has been named in memory of Jean Forbes, a former governor.  Jean was a much loved and respected governor of Shimna, who served for many years as chair of the college Estates Committee.  She worked tirelessly to develop Shimna’s buildings and grounds, from chairing meetings, to drawing up plans, to getting out there in her wellies and planting trees.

“Jean had an outstanding academic pedigree herself and championed academic excellence at Shimna as an Integrated and all-ability school.  It was an honour to have Jean with us, and we know she would be very proud of this building, and of the school garden which is taking shape beside it.

“When we look back to the first of September 1994 when we opened, it was an exciting time. Our first intake was sixty pupils and it has grown from then. We needed to retain those sixty pupils and were successful in retaining funding from the Department. And they have been very supportive since then and we are very thankful for this.

“When we began, we first introduced English and French A-Level, as that is what we wanted to show the parents where we wanted to go. We felt we had to do something to enhance the educational opportunities of the pupils. We were able to progress with help from the Department of Education and the Integrated Education Fund. Over the years, we have been careful to avoid mobile accommodation at all costs.

“Our vision is a post-primary school for all students of all abilities to fulfil themselves, and for each to reach their full academic potential.”

Speaking after the opening, Cllr Clarke said: “It is great to see the Department of Education continuing to assist Shimna College financially, and the fruits of this assistance are clear to see. Shimna College has developed in leaps and bounds and offers a high quality of education for young people in the Newcastle area and further afield.

“It was particularly poignant that the newly built block at the school was named after Jean Forbes. Jean will be sorely missed in Newcastle. She was a brilliant ambassador for the school and showed great commitment in all aspects of what she took part in.

“Her work with the Newcastle 2000 group was second to none and she showed great vision in developing Newcastle’s potential as a tourist town and indeed improving the lives of everyone in the Newcastle area.”