ONE of County Down’s best known talents, comedian Paddy Kielty from Dundrum along with his glamorous new wife Cat Deeley, are together up for a new accolade as Northern Ireland’s most anticipated social event takes place next week in Belfast’s City Hall.

The annual Glamour Awards, hosted by celebrity and social monthly IN! Magazine in partnership with Danske Bank, will see over 350 of Northern Ireland’s glamorous and glitterati watch well-known faces such as Terri Hooley, Eamonn Holmes and Joanne Salley take the stage.

The event, hosted by stunning TV presenter Zoe Salmon in the decadent surroundings of Belfast’s City Hall on 03 November, is now in its fourth year and will see glamorous guests from across the UK and Ireland take to the red carpet for an evening of gourmet food and of course, glamorous awards. With some of Northern Ireland’s most popular sporting legends like Johnnie Rea and Rory McIlroy, as well as Northern Irish actors like Liam Neeson and Seainin Brennan all nominated, the country’s brightest stars will be lighting up City Hall.

Eight loved up couples will be vying for the title of ‘Most Glamorous Couple’ sponsored by The OUTLET, Banbridge, including recently-hitched power couple Alison and Darren Clarke, Christine Bleakley and Frank Lampard, sporting stars Rory McIlroy and Caroline Wozniacki, and Paddy Kielty and Cat Deeley, among others.

Not only will the event announce the deserving winners of each of the regular seven principal categories, which are sponsored by businesses including hugely successful Northern Irish tan brand Vita Liberata, sport drink Powerade, Yacht Masters, The OUTLET, Belfast beauty mecca Skin Medi-Spa, Ticketmaster DV8, Shannon’s The Jewellers, and Perfect Night formalwear, but this year’s awards will also feature the introduction of the Breakthrough Designer category, sponsored by Hairdresser Andrew Mulvenna, where Northern Ireland’s upcoming creative talent will be recognised for its massive strides in the fashion industry in recent years.  Finalists among nominees for the award include Shauna Fay, Lisa McCabe’s Nor Lisa line, Shauna Fay, Emma Logue, Ruedi Maguire and Susan Black.

A full list of the eight award categories and the shortlisted nominees can be found in the October edition of IN! magazine which is on sale now as well as online at www.in-magazine.co.uk.

There will also be a prize for ‘Most Glamorous on the Night’ sponsored by chic Lurgan eveningwear boutique Perfect Night, as well as an exclusive spot prize for one of the lucky guests in attendance. 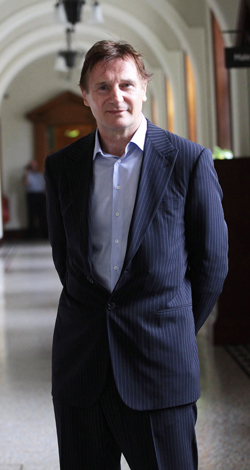 Organiser and IN! publisher Lisa Harrison said:  “The event is in its fourth year now and we are back, bigger than ever, to continue our celebration of the talents and achievements of some of our best known and most glamorous personalities.

“This will be our most exciting and stylish evening yet, right in the heart of Belfast, with a programme of thrilling entertainment and gourmet food in what will be a star-studded evening to remember.”

Man Of The Year (Sponsored by Yacht Masters):

Most Glamorous Couple (Sponsored by The OUTLET):

Sports Personality Of The Year (Sponsored by Powerade):

Cover Of The Year (Sponsored by Skin Medi-Spa):

Most Glamorous On The Night (Sponsored by Perfect-Night):

Event Of The Year (Sponsored by Ticketmaster DV8):

Most Stylish Professional (Spnonsored by Shannon’s The Jewellers):